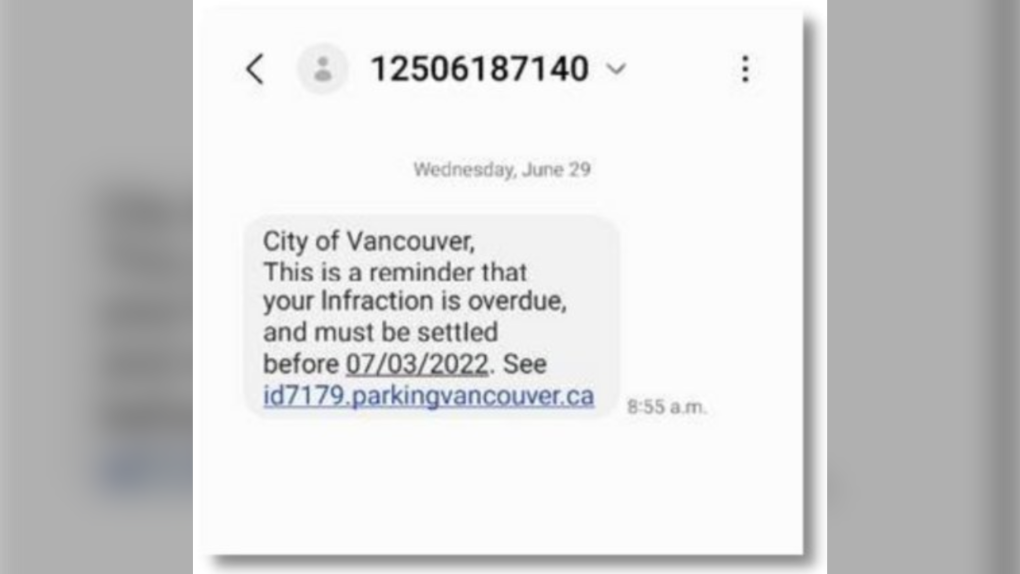 An image posted by the City of Vancouver shows a scam text.

The City of Vancouver is warning residents not to click on links or give personal information in response to text messages about overdue parking tickets claiming to be from the city.

"We have been notified of a scam targeting people through text messages requesting they pay an overdue parking ticket," the city said on its municipal Twitter account Wednesday.

"This is not the city, we do not notify the public of fines through texting, media or social media."

The only means the city uses to collect parking-related fines are tickets placed on vehicles or mailed to their registered owners, according to the city's website.

The city advised recipients to report the fraudulent messages to their cellphone providers and then delete them.

Vancouver is far from the only government entity scammers have impersonated in an attempt to gain access to money and personal information.

Within days of the announcement that ICBC would be offering drivers a one-time payment aimed at lightening the burden of high gas prices, fraudsters had already begun sending scam texts claiming rebates were available.

What should Canada be doing about climate change? 25 recommendations

The national Net-Zero Advisory Body released 25 recommendations Friday for how Canada can adjust its climate plan to reach net-zero emissions by 2050 — a goal that the country is not on track to reach right now, according to the report.

The federal government posted a budgetary deficit of $3.6 billion in the first eight months of the fiscal year.

What looks like a giant teddy bear’s face peering into space from the surface of Mars is actually a satellite image of some craters and a circular fracture, scientists say.

Though you won't be able to sit on the old, cracked pleather benches and take in the thick smell of gravy and fries, while the gentle sound of clanging dishes provides the soundtrack for your lunch, Zellers plans to roll out food trucks for those 'craving a taste of nostalgia.'