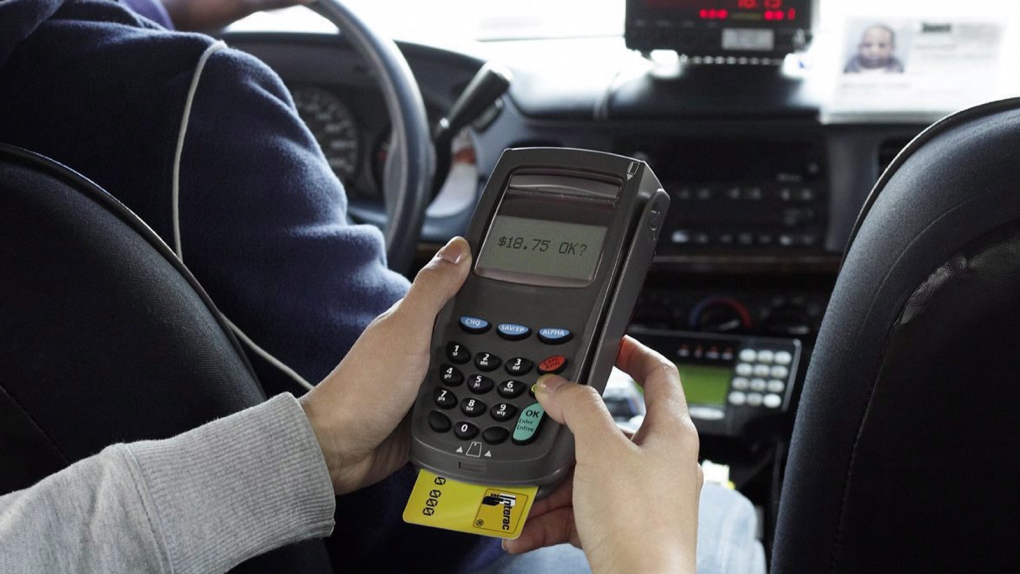 A customer uses his Interac card to pay for a taxi cab ride, in this undated handout photo. (HO- Interac Association / THE CANADIAN PRESS)

Police in Richmond, B.C., are warning about a scam where a young man says he needs help paying for a taxi before leading them to a fake cab with a fake driver.

The RCMP say they have received four reports in the last five days involving seven would-be Good Samaritans who used their debit card to help the man -- only to wind up saddled with hundreds of dollars worth of charges for purchases they did not make.

They described the scam as targeting people in "busy parking areas" in a news release Wednesday.

"Upon agreeing to help, the victim is told by the taxi driver that he does not take cash due to COVID, nor does he accept credit cards. The unsuspecting victim then provides the driver with a debit card to pay for the transaction electronically," the statement from the detachment says.

"The driver then claims the tap function on his electronic payment machine does not work. He then takes the victim’s card, pretends to make a transaction, has the victim put in their PIN number, and gives a bogus card back to the victim. "

"This scam appears to be a new one for the City of Richmond," writes Cpl. Ian Henderson, saying an investigation is ongoing but a police thought the scam warranted a public warning.

More Canadians report strong attachment to their language than to Canada: poll

A new survey finds more Canadians report a strong attachment to their primary language than to other markers of identity, including the country they call home.

Law enforcement in Hawaii on Wednesday arrested social media model Courtney Clenney on a charge of second-degree murder with a deadly weapon.

Russia seemingly struggles to replenish its troops in Ukraine