VANCOUVER -- British Columbia is ramping up vaccine-distribution planning with the naming of an ex-military surgeon to oversee the mammoth task, an appointment that comes as the premier mulls the idea of asking for more doses now that the province has more active cases per capita than Ontario and Quebec.

While the exact date one of the yet-to-be-approved vaccines could arrive in Canada is very much an open question, CTV News Vancouver asked John Horgan if he was considering asking for more than our share considering the swell in active cases relative to other provinces.

"That's an interesting question, because at the front end you'll remember British Columbia's case count was quite low relative to other jurisdictions and at the time we continued to talk about per capita funding, whether it be for safe restarts, other initiatives,” said Horgan. “So we've always worked, from my perspective, that all provinces are equal and despite that, all provinces have different needs and different requirements."

While B.C. is well behind the prairie provinces in active, per-capita infections (640 per 100,000 for Manitoba, 256 for Saskatchewan and 313 for Alberta), at 176 active cases for every 100,000 residents, the province is worse off than Ontario (88) and Quebec (129), according to a comparison compiled and updated daily by the federal government. 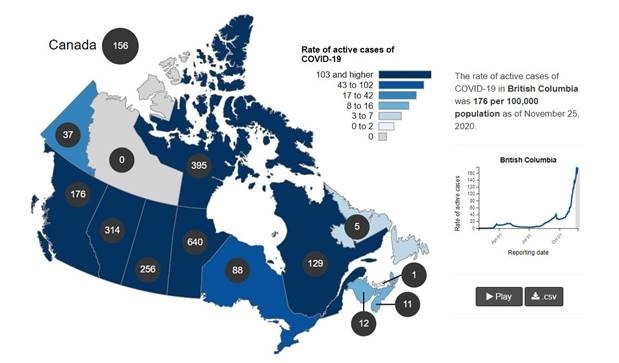 “The creation and procurement of the vaccines is a federal responsibility and we’re going to be working with other provinces to make the case that when those vaccines become available, when therapeutics have been tested and can be used in our acute care and (intensive care) facilities, that we are at the front of the line with everybody else saying, ‘These are our needs.’ And, I know the federal government will do its best to make sure they distribute those therapeutics in a fair and equitable way,” Horgan said. “That’s my job to make that case, and I’ll continue to do that.”

The premier’s comments come a day after the province’s top doctor named an ex-military trauma surgeon and Olympic medical supervisor to the post of vaccine czar. 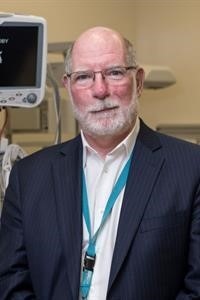 Dr. Ross Brown, who’s currently Vancouver Coastal Health’s vice president of pandemic response and has been the Regional Emergency Operations Centre director since March, is also a working surgeon in the community, according to his biography on the health authority’s website. While he started his medical career with an internship St. Paul’s Hospital, his career took him overseas with two tours in Bosnia and three in Afghanistan with the Canadian Forces before he returned home. In 2010, he oversaw the Whistler Polyclinic and Mobile Medical Unit for the 2010 Winter Olympics.

“He's going to be working with me to make sure that we have all the operations and logistics in place so when a vaccine comes we can get it into the arms to protect people as soon as we possibly can and most efficiently as we can,” said provincial health officer Dr. Bonnie Henry on Wednesday. “Part of that will be communications, part of that will be looking at our IT systems, looking at how do we physically get vaccine that needs to be frozen to minus 70 to the places we need it to be? Who's going to deliver it?”

Henry also hinted that per-capita allocation of the vaccines by the federal government isn’t a given.

“We know they're still in the final decision-making about how much vaccine each province is going to get, but we expect and what we're planning for is first week of January, week one of 2021, to be ready to deliver the Pfizer and Moderna vaccines and we will have phases after that,” said Henry. “So we have the details. We know that we need to start that process and to make sure we have everything in place to be able to do that, and that's our focus right now.”