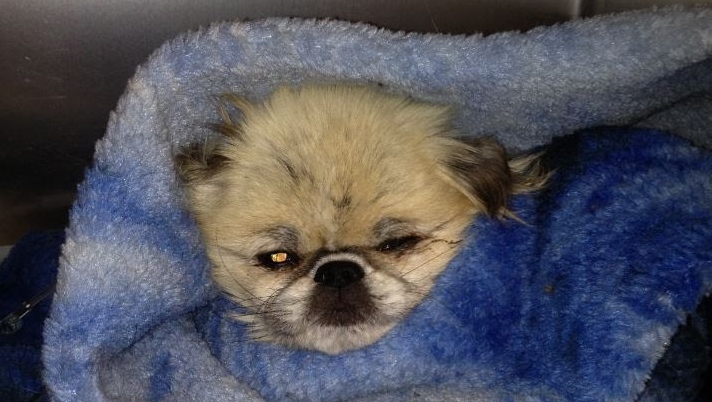 Falcor, a Pekinese mix, displayed signs of horrific and traumatic abuse when he was brought to the North Cariboo SPCA in Prince George. (BC SPCA)

Warning: some readers may find the images below disturbing.

The BC SPCA says an investigation is underway after a small dog was brought to their care suffering from a horrible open wound and showing signs of traumatic abuse.

In a release Friday, the animal care agency wrote Falcor, a Pekingese mix, was brought to the North Cariboo SPCA in Prince George and had a large open wound on his back.

The dog had been shaved, which exposed his injured back; his flesh had begun to rot and was covered with maggots when he was taken to a veterinarian.

“This dog has suffered immensely and deserves a fighting chance,” BC SPCA chief prevention and enforcement officer Marcie Moriarty said in the release.

“We have reason to believe that he was a victim of cruelty and are currently investigating this case.”

The SPCA writes the dog will need extensive testing to assess whether he’s suffered internal organ damage, however Falcor is simply too weak to undergo the battery of X-rays and bloodwork. he’s currently at a veterinary clinic getting life-sustaining care until he regains his strength.

“We do not know how deep this innocent canine’s psychological wounds are or how he got such a severe gash along his back. What we can give him is a second chance to live and show him that there are kind people in the world who care,” wrote the animal protection organization.

By 2:30 p.m. Friday, all of Falcor's medical costs had all been covered by donations, and had nearly exceeded the $5,000 goal by a thousand dollars.

If you have any information into the ongoing investigation, please call the BC SPCA cruelty hotline at 1-855-622-7722.

Donations for Falcor can be made here.