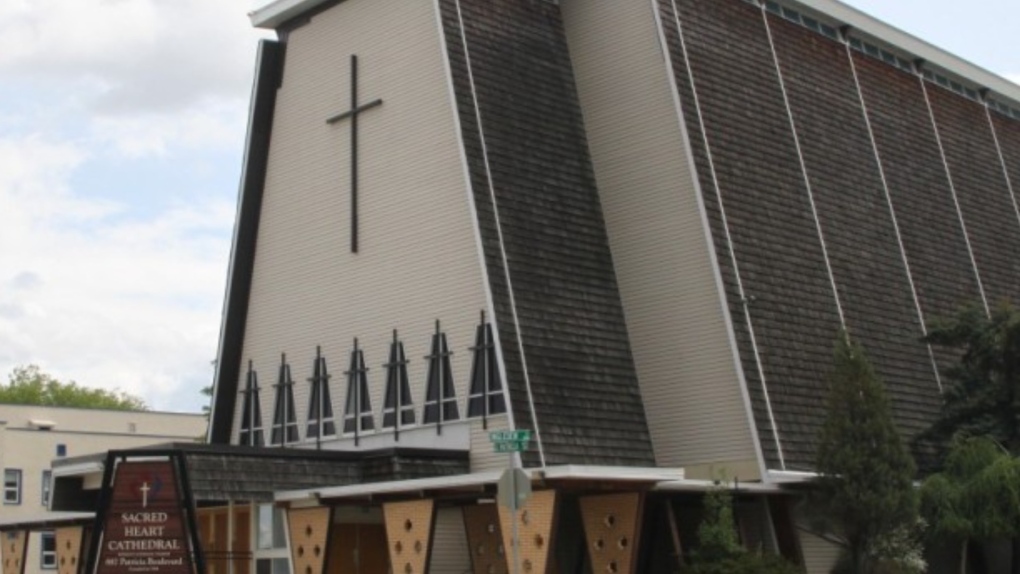 Sacred Heart Cathedral in Prince George is seen in this image from its website. (shcathedralpg.bc.ca)
Vancouver -

A Catholic church in Prince George has been vandalized, and not for the first time, according to the local RCMP detachment.

The latest instance of vandalism at Sacred Heart Cathedral on Patricia Boulevard happened sometime between 11 p.m. on Tuesday and 1 a.m. on Wednesday, according to a news release from Prince George RCMP.

Police said they were notified of the graffiti that had been spray-painted on the church's front doors shortly before 4 a.m. on Wednesday.

Responding officers saw the phrase "Every Child M" painted on the doors, police said. The phrase seems likely to be the start of the slogan "Every Child Matters," which has been widely used in solidarity with Indigenous communities in B.C. and across Canada as First Nations continue to discover unmarked graves on the grounds of former residential schools.

For most of their history, Canada's residential schools were run by Christian churches - including the Catholic Church - on behalf of the federal government.

The schools were known for overcrowding, poor sanitation, unhealthy food and menial labour. Harsh punishment was given to students who spoke their native language or took part in traditional ceremonies.

"Every Child Matters" was also painted outside of Knox United Church in July, and several other acts of vandalism have been committed at Sacred Heart and other churches around the city since June, according to RCMP.

Last week, police released summaries of 10 such incidents at five different churches in Prince George and asked the public for help identifying suspects in some of the cases.

"Police are continuing to do proactive patrols around places of worship in Prince George to curb the ongoing vandalism," RCMP said in their latest release on Thursday. "Additionally, some churches have taken the extra step of hiring private security to conduct their own patrols."

Mounties ask anyone who has information about the most recent incident at Sacred Heart Cathedral or any of the other acts of vandalism at churches around the city to call them at 250- 561-3300.

Prince George is not the only place where churches have been targeted for vandalism and arson this summer.

Several churches on First Nations reserves in the Interior were burned in late June and early July, and police in Metro Vancouver have also reported a number of incidents.