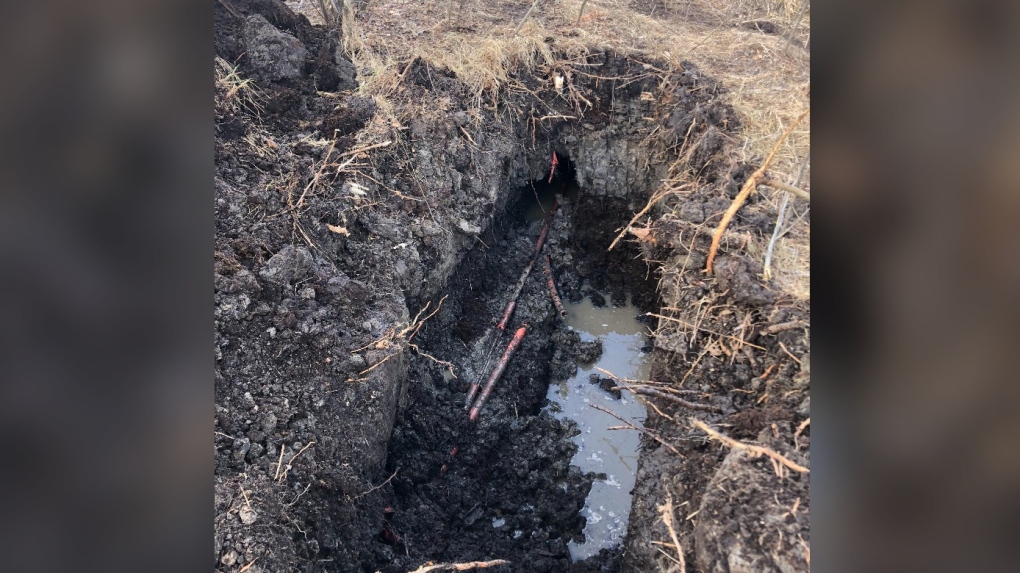 Crews dug up an area of partially frozen ground to expose Telus fibre cables that had been damaged by Beavers in Tumbler Ridge, B.C., on Saturday, April 24, 2021. (Telus/Supplied)

VANCOUVER -- Update: Service was restored at 3:30 p.m. Sunday, April 25 according to Telus. The original story follows.

Beavers are being blamed for an internet, cellphone and cable TV outage in a remote town in northern B.C.

Tumbler Ridge, a four-hour drive north-east of Prince George, with a population of 1,982, is in the midst of what is now a two-day-long Telus coverage outage due to damage on local fibre cables by resident wildlife.

“(It) feels like a very unusual and uniquely Canadian turn of events,” said Telus spokesperson Liz Sauvé in an email.

“Beavers have chewed through our fibre cable at multiple points, causing extensive damage,” reads her statement.

Internet service for about 900 homes and businesses, as well as cable service for 60 customers, was first disrupted on Saturday, April 24 just after 4 a.m. Soon after, crews were sent to investigate.

What they found is proof that safeguards don't always work against beavers doing what comes naturally to them.

“Our team located a nearby dam, and it appears the beavers dug underground alongside the creek to reach our cable, which is buried about three feet underground and protected by a 4.5 inch thick conduit (tube),” Sauvé continued.

“The beavers first chewed through the conduit before chewing through the cable in multiple locations,” she said.

Telus crews have been working “around the clock.” The work is made challenging by the fact that the ground above the cables is partially frozen.

A photo of the scene shows a wide hole, several feet deep, and at the bottom, what appear to be damaged cable ends sitting beside a small pool of water.

Cellphone service has also been disrupted, thanks to the beavers.

“We have some overlapping wireless service in the community from other nearby cell towers, but cellphone service will be spotty or disrupted for many of our customers in the area,” Sauvé said.

The company says it’s “very sorry for this interruption,” but that it expects service to be restored by the end of the day.