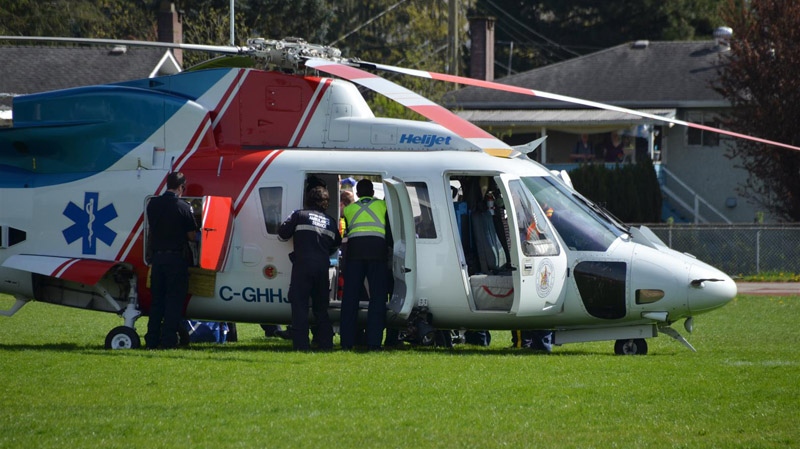 A B.C. air ambulance is pictured in a file photo.

Two people have died after their vehicle crossed into an oncoming lane of traffic on a British Columbia highway Wednesday.

Mounties say the unidentified occupants were travelling north on Highway 5 at the time.

They were in a sedan near the Six Mile Bridge in Blue River when their vehicle crossed into the other lane just after 2 p.m. The cause has not been determined, but officers believe the driver, a man in his 70s, may have had some kind of medical emergency.

The vehicle struck the back of a trailer with a wide load, B.C. Highway Patrol said. It then swerved back into the northbound lane and crashed head-on into a pilot truck.

The senior driver and his passenger, a man in his 20s, both died.

The woman who'd been driving the pilot truck was seriously injured, and taken to hospital by air ambulance. Mounties did not provide an update on her condition in Thursday morning's news release.

The Clearwater RCMP detachment has conduct of the investigation, and is working with BCHP, a collision analysis team and the B.C. Coroners Service.

A stretch of Highway 5 was closed for hours Wednesday as officials investigated. Later, a single-lane of alternating traffic was let through.

Anyone who has information about the crash is asked to call the Clearwater RCMP.