B.C. families could see child-care fees cut by as much as $550/month

B.C. families could see child-care fees cut by as much as $550/month

The child-care officials said parents with children under the age of three in group care will see the biggest savings with fees being reduced up to $550 per child each month by Dec. 1.

Parents with children aged three to five could see fee reductions up to $445 monthly. Those with children in kindergarten receiving before- and after-school care could save up to $220 per month.

Savings will be higher for families accessing group care than for those using family and in-home care.

Chen explained the province first focused the reductions on "where fees are the highest," which tends to be for young children under the age of five. It's expected the fee reductions will be expanded to all school-aged children next September.

"To all the parents, I want to tell you that, as a mother myself, we feel you … we understand that child care is critical for our economy for our children and for our families' well-being," Chen said during Friday's announcement.

The province said it'll work directly with child-care providers, so parents won't need to apply to get lower fees. The new savings aren't income-based and officials estimate families of about 69,000 children will benefit from the fee reductions. 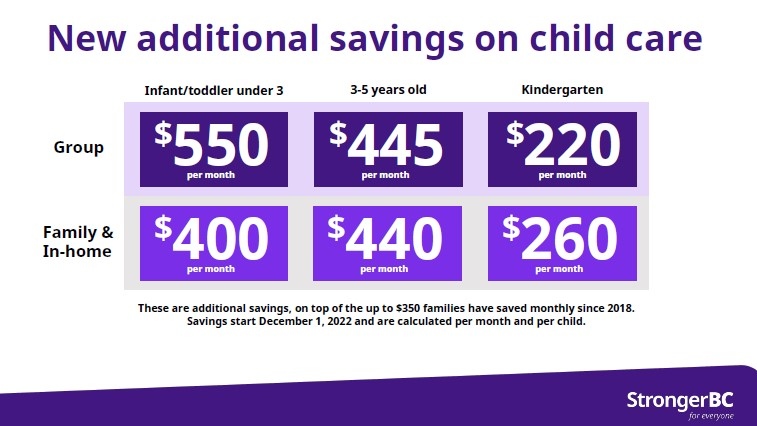 "Child-care costs are often the cost of another mortgage. They're often more what you're paying out-of-pocket than what your take-home pay is in a month," Gould said Friday.

Child-care providers will be able to raise their fees, but by no more than three per cent of the typical fee being charged by similar providers in their region.

By the end of the year, parents with kids in kindergarten and younger are expected to pay an average of $21 per day. The province said that's down from an average of $53 a day before any of its ChildCareBC supports were implemented.

Applications for those spaces were reviewed on a rolling basis and were accepted until mid-August.

Officials said Friday the province is on-track to offer these child-care spaces.

'STEP IN THE RIGHT DIRECTION'

The First Nations Leadership Council said in a statement Friday it applauds the work the province is doing to reduce child-care fees, calling it "a significant step in the right direction."

Many First Nations people find themselves at the bottom of the economic ladder in Canada. Unfortunately, for them, child care and preschool have been an unreachable 'luxury,' which they could simply not afford," Cheryl Casimir, First Nations Summit political executive, said in a news release.

"This increased funding will allow all First Nations parents, no matter how low their income, to send their children to preschool and daycare, inclusive of First Nations’ culture and language."

Members of the B.C. Assembly of First Nations said more work needs to be done to improve access to child care in rural, remote and reserve communities.

"We look forward to engaging with the province to discuss distinction-based funding opportunities and supports for First Nations on reserve wanting to establish licensed child-care facilities," Chief Terry Teegee said in a statement.

The province said its new child-care savings are being funded through a five-year, $3.2 billion Canada-B.C. Canada-wide early learning and child care agreement.

A veteran and former Paralympian told a parliamentary committee that a caseworker from the Veterans Affairs Canada offered her medical assistance in dying, a week after the Veterans Affairs Minister confirmed that at least four other veterans were offered the same thing.

The lawyer representing a Winnipeg man accused of killing four Indigenous women says his client 'absolutely' maintains his innocence and intends to plead not guilty.