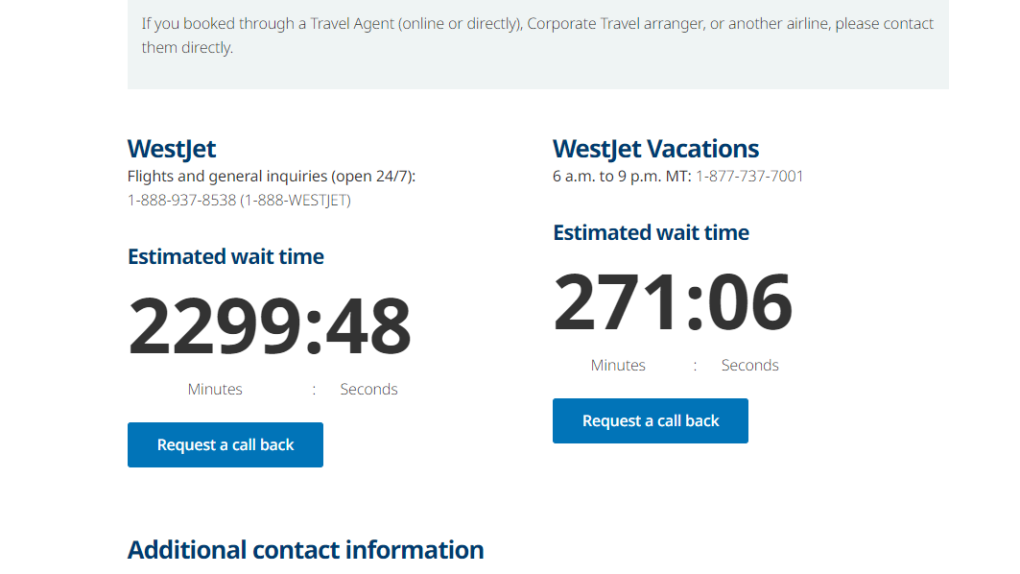 A screenshot of WestJet's website from Saturday, March 14 shows an estimated 38 hours of wait time to talk to a customer service agent.

VANCOUVER -- March 16 update: Air Canada posted on Twitter Sunday that anyone who booked their flight through its website, app or contact centre can now cancel their flight online up to two hours before departure.

WestJet asks anyone who wishes to cancel a vacations package to do so online. Flight cancellation requests can be made by filling out a form on the airline's website.

B.C. residents say they've spent hours on hold, or haven't been able to get through on phone lines at all, as people rush to cancel flights in the wake of new travel warnings from the Canadian government.

On Thursday, B.C. health officials advised against all non-essential travel outside of Canada. On Friday, Prime Minister Justin Trudeau echoed that message; on Saturday, Global Affairs told Canadians abroad to come back while they still have the chance as countries around the world continue to impose travel restrictions.

On Saturday, WestJet's website was showing an expected wait time of 2,299 minutes, or 38 hours; by Sunday, that feature had been removed from the company's website.

Laurie Jenkins is a Vancouver travel agent who spent a continuous seven hours on hold on Friday before she finally got through on Saturday. She said the situation is unprecedented and urged travellers to be patient.

If your travel is not within the next week, hold off on calling because airlines' call centres are completely overloaded right now, Jenkins advised.

"This is not the time to be making complaints to the better business bureau because someone's not picking up their phone," said Jenkins, who has worked as a travel agent for over 30 years.

"They would pick up their phone if they absolutely could. They are running in crisis mode too."

Jenkins said that after her marathon on-hold session, she was able to successfully get her client a credit for the $10,000 he'd paid to book a family vacation package through WestJet – right before a 72 hour deadline to be eligible for reimbursement kicked in.

But others say they're still not sure whether they'll get their money back because they haven't been able to get through to anyone, despite hours of trying.

Andrew Eisenberg was supposed to fly from Vancouver to Fort Lauderdale, where his parents live, with his wife and two children on Sunday morning. But the family decided to cancel the trip nearly a week ago at the urging of Eisenberg's parents.

Eisenberg had booked the trip using credit card rewards points, and he knew from online information provided by the airline, Air Transat, that he would have to call RBC Rewards first.

"The first five times we called, I couldn't get through at all," he said. "The sixth time or so I got through and was put on hold, and then it disconnected."

That same experience was repeated every time Eisenberg tried to call over the next few days; a call to Air Transat, where his wife was on hold for nearly two hours, simply confirmed that they needed to call RBC Rewards.

The couple used a combination of rewards points and $900 to buy the airline tickets. Eisenberg said after talking to his credit card company, he got an assurance that "we will do our best to help you," but it's still not clear if and when he'll get a refund.

Andy and Nikki Saunders were supposed to fly with WestJet from Kelowna to Palm Springs on Saturday with their two children, but made the decision to cancel after seeing the news of Trudeau's warnings on Friday. The Vernon couple spent $1,800 on the flights, as well as using WestJet customer reward points.

"I was told by our travel insurance company that if we get stuck down there, they would not be able to extend insurance," Andy Saunders told CTV News Vancouver.

"If something happened during the two weeks we were supposed to be there, we'd be covered. But if there was a travel ban and we couldn't get back, we wouldn't be able to extend our medical insurance."

Starting at 8 a.m. on Friday, the couple tried repeatedly to call WestJet, but kept getting a "this call cannot be put through" message or a busy signal. They were finally able to get through to an agent at 7:30 p.m. that evening, but were taken aback at what they were told.

"We talked to a customer service agent who admonished us for not contacting them and said this was our fault and this was our choice to not fly," Saunders said. "And the best they could do was a $100 penalty fee, per person, per direction."

Saunders noted that penalty would have totalled $800.

"When I protested and said that's borderline fraud due to the situation, (the agent) hung up," he said.

But amidst the travel chaos, not everyone has had a bad experience. Brian Redillas, a Vancouver resident, said he had a relatively frictionless experience when he called WestJet on Thursday to cancel a flight and hotel package to Cabo, in Mexico. He was booked on a flight that departed on Sunday.

"On Thursday afternoon…after the B.C. government announcement to limit any non-essential travel, I tried calling the number for about 20minutes before the call actually connected," Redillas said in an email to CTV News Vancouver.

Redillas was on hold for close to three hours, then spoke to a customer agent who wasn't able to offer a full refund because the flight was not to an area that had a full travel advisory or ban, he said. But he did get a credit that he can use for a future trip.

WestJet did not respond to a request for comment about the Saunders' experience, but in a March 14 statement the company said it was experiencing very high call volumes for phone, email and social media support. The company asked customers who do not have "imminent travel plans" to not call until 72 hours before their flight.

The airline offered the following directions to passengers: