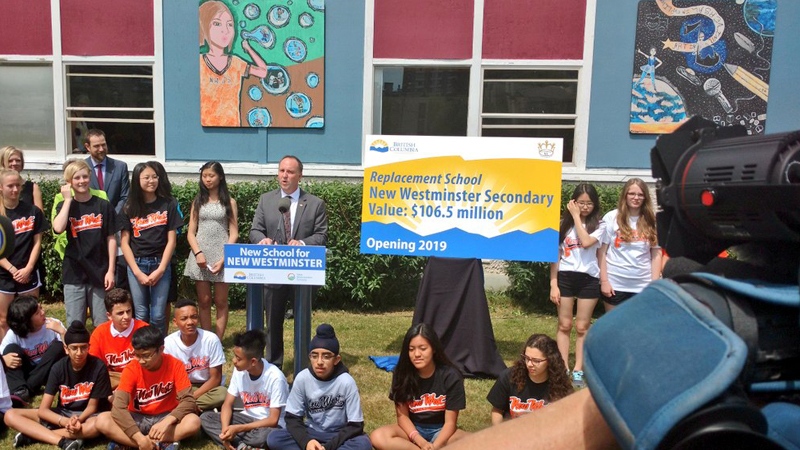 One of B.C.'s most dilapidated high schools will be getting a $106.5-million upgrade from the province.

After more than a decade of lobbying by parents, teachers and the school board, the government announced it will foot the bill to replace the aging New Westminster Secondary School.

The original school opened in 1949 and contains asbestos, lead paint and occasional rodent infestations. The building is considered unsafe.

Several parents showed up at the announcement outside the school Tuesday afternoon, many with children who are years away from enrolling in high school.

They said they felt the need to pressure the government to build a new school so it will be completed in time to meet their children's needs.

The school has needed an upgrade for years, but the rebuild was partially delayed due to consultations with First Nations and Chinese-Canadian groups, Education Minister Mike Bernier said.

The original school was built on top of a First Nations burial ground and a cemetery where many Chinese-Canadians were laid to rest.

The province and the New Westminster School District said the new structure will not encroach on those areas.

Chief Rhonda Larrabee of New Westminster's Qayqayt First Nation was on hand for the announcement, and said the project is a compromise her band can live with.

She said she hopes that the plan for the new school will include an enhanced curriculum about indigenous peoples. She would also like to see a permanent memorial at the site of the First Nations burial ground.

Planning for the design of the new school is still in the early stages, but the school board says it will begin consultations with stakeholders immediately.

The new New Westminster Secondary School is scheduled to open in 2019.