The discovery of human remains on a farm in B.C.'s Southern Interior has left some families of missing local women bracing for tragic news.

John Simpson, whose daughter Ashley disappeared in the area back in April 2016, said the uncertainty surrounding her disappearance is eating away at him.

"You can't eat, you can't sleep," Simpson told CTV News. "You try to get on with your life, and how can you when you're just waiting for that next phone call?"

RCMP officers first arrived at the rural farm, located between Vernon and Salmon Arm on Salmon River Road, last Thursday and are still searching the property for evidence.

Authorities have not said whose remains they uncovered, or whether there might be more than one person dead. Simpson was told the initial investigation at the property didn't involve his daughter, but given the lack of information he's received since, he remains uneasy.

"That's the hardest thing," he said. "It just breaks all of us here as a family that she went missing for unknown reasons."

Several other women have disappeared in the area since the start of 2016, including Deanna Wertz, a 46-year-old who vanished near her home on Yankee Flats Road.

All of the women went missing within a 45 minute drive of the Salmon River Road property that is still buzzing with police activity.

The discovery of the human remains came weeks after a violent incident against a sex worker down the same rural road. The victim said she was threatened by a man with a gun in late August, an incident that prompted local RCMP to issue a public warning.

Curtis Wayne Sagmoen, 36, was arrested and charged with seven crimes, including uttering threats and several counts related to firearms.

Locals told CTV News he lives at the Salmon River Road property with his parents.

Mounties have not drawn any connection between the August incident and the search warrant executed at the Sagmoens' home. 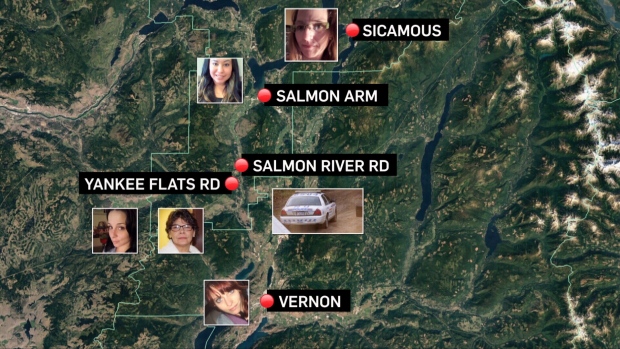 Several women have gone missing within a 45-minute drive of a rural B.C. property where human remains were discovered this month.