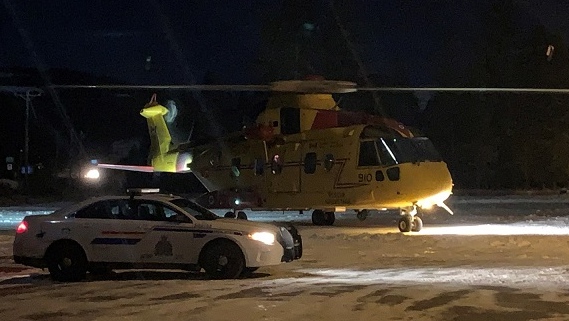 A Cormorant helicopter belonging to the Canadian Armed Forces was dispatched to help rescue a police officer and suspect who were stuck in the bottom of a ravine (Photo B.C. RCMP).

VANCOUVER -- A military helicopter and plane were sent to rescue a police officer and a suspect who were stranded at the bottom of a ravine after a dramatic chase on foot resulted in a medical emergency, say police.

Members of the Canadian Armed Forces flew from Comox to the Kootenays on the evening of Dec.1, in a search and rescue plane and a Cormorant helicopter where they helped extract the officer and suspect with a long-line.

The foot-chase began after RCMP from Midway were called to an alleged break-and-enter on Fish Lake Road near Bridesville, which is normally a more than 20-minute drive west of their station.

Four suspects were captured by police, but the fifth was elusive and “fled on foot.”

“The fleeing suspect jumped into a ravine, followed closely by a pursuing officer,” reads a news statement from Cpl. Jesse O'Donaghey of the Southeast District B.C. RCMP.

The suspect then “entered the river multiple times” before the officer chasing him was able to capture him. But by the time the suspect was caught, the two men were hooped.

Police would later learn that the 47-year-old Bridesville man was wanted on several outstanding warrants for his arrest.

The pair “found themselves nearly 400-feet down the ravine, trapped and unable to climb back out, or be reached by any conventional means,” continues the RCMP statement.

“To complicate matters the suspect was quickly becoming hypothermic, while the officer was dealing with exposure to the frigid temperatures.”

Backup officers from neighbouring units, including some from Osoyoos, were called to the scene, but they weren’t able to rescue the two men.

Other citizens in the area, unconnected to the pursuit, also stepped in.

These people “tossed warm clothing and supplies down to the officer to start a fire and keep warm.”

But, unable to extract the officer and suspect, stuck together at the bottom of a ravine, RCMP called in the military for help.

At 9:20 p.m. the suspect was “airlifted out of the ravine by (military) SAR Techs,” reads the statement.

“The 47-year-old Bridesville man was airlifted to a regional hospital for a full medical assessment and treatment for exposure related injuries.”

About an hour later, military personnel rescued the officer but he didn’t require medical attention.

The man at the centre of the pursuit was still in police custody as of Dec. 3, and faces “additional charges,” say RCMP.

The other suspects were released on the scene.