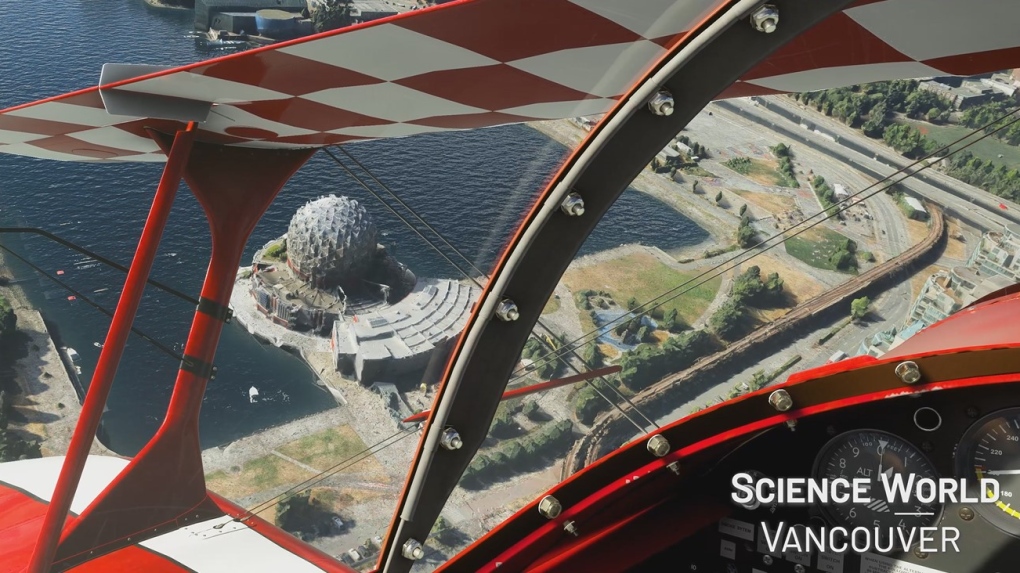 A digital recreation of Science World is seen in an image from Microsoft Flight Simulator. (Microsoft)

From Stanley Park to the B.C. legislature buildings, some of the most eye-catching landmarks in British Columbia have been digitally recreated by Microsoft.

Other notable examples include Science World, B.C. Place Stadium, the Bloedel Conservatory and the central branch of the Vancouver Public Library.

The landmarks are part of a free Canadian update to the company's Microsoft Flight Simulator video game, which has recreated an array of locations around the world using geospatial data that includes "digital elevation models, satellite imagery, and aerial photography."

Other Canadian locations added to the game Thursday include the parliament buildings in Ottawa, Olympic Stadium in Quebec and Iqaluit International Airport in Nunavut.

Microsoft said five B.C. airports have been added to the game, including West Kootenay Regional Airport in Castlegar.

There are also three new "landing challenges" – which task players with making a perfect landing under specific conditions – including one that's set in Barkerville, the famous gold rush town in the province's Cariboo.

Check out images of some of the new Canadian locations below.

Ontario Energy Board warns of scammers impersonating its employees

Door-to-door sales have been banned in Ontario since March 2018, but that’s not stopping aggressive sales staff from pitching expensive long-term rental contracts for items like furnaces and air conditioners.