Mi-Jung Lee's battle with breast cancer: In her own words 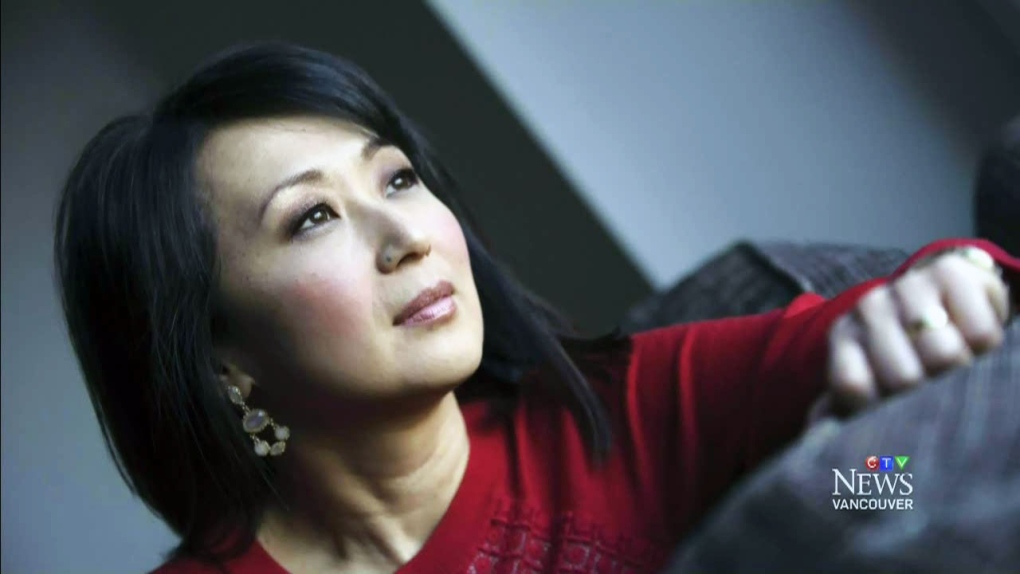 Four p.m. in the CTV newsroom, the communal buzz factor ramps up. Producers, anchors and writers bark questions and trade sarcastic barbs from their respective pod of desks as they prepare for the supper hour shows. Privacy? That’s what the bathroom is for.

That June afternoon, I was getting ready to anchor CTV News at Five. My cell phone rang. It was my doctor. I’m sure that under my artfully applied, HD-ready makeup, I was going pale. I had to walk away from my desk and other ears. As I looked out the fourth floor window to Robson and Burrard, he told me the biopsy results. The lump I had found was Ductal Carcinoma -- Estrogen Receptor Positive, also known as breast cancer.

The shoppers continued walking down Robson with their bags. How was I supposed to carry on nonchalantly like the office workers walking out of the coffee shop with their lattes?

I phoned my husband and asked if he thought I could still anchor the show. He threw another “C” word at me: Compartmentalize. Easy for him to say! Men do this all the time, much to the frustration of their multi-tasking female partners. Deep breath. Okay, this would be compartmentalizing and multi-tasking at the same time. Compart-tasking.

I went back to my desk and tried to push the personal news off to the side. Journalists deal with bad news all the time, right? But it’s hard to be all Zen when the central character in the cancer story is me. It was one of the few times in my life, I didn’t want the leading role.

The familiar music of the show’s opening began and I was standing at the anchor table. Hang on Mi-Jung, here we go. Makeup not running? Check. Hair shellacked in place? Check. Inner turmoil? Double check.

I tried to read the intros with confidence and compassion. During a few moments, I felt my mind drifting toward the diagnosis. I quickly reeled my thoughts back to familiar territory -- the stories making news in Vancouver. It’s only an hour, Mi-Jung. The first of many hours you’ll be living with this news. As usual, I chatted with the studio crew during the commercial breaks. Six p.m. -- I introduced Tamara Taggart and Mike Killeen. I had made it without becoming a heap of tears under the bright studio lights. 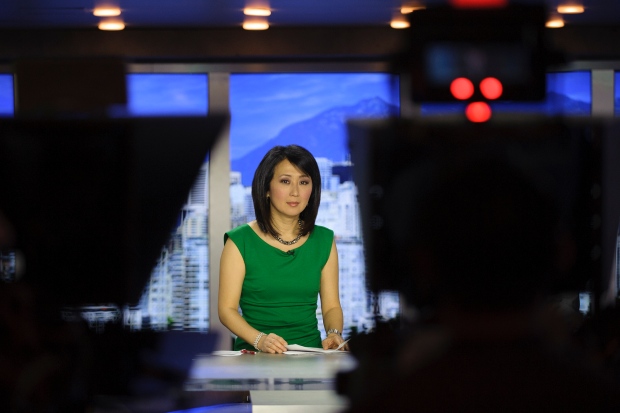 I had tried hard to mask my personal turmoil with charisma and warmth.

At least that’s what I thought I was doing.

But shortly after the show ended my biggest fan called. My mother.

“Why did your face look so sad?” she asked. “Is there something wrong?”

My mother has always been highly intuitive but this was nuts. She saw right through her TV and into my heart. I told her I was fine. I wasn’t ready to tell her then about the breast cancer. I had enough to worry about, without worrying about my mom worrying about me.

I also dreaded telling our 13- and 15-year-old sons about my diagnosis.

I didn’t want them to be scared. I felt I could fill the fear quota quite handily myself. I know, I know, I’m supposed to be positive.

Turns out, my parents and our sons took the news better than I thought. Of course they were concerned, but they didn’t show it to me.

I like being in control. Finding out you have a life-threatening illness kind of gets in the way of that.

What? I’m supposed to work full-time, raise two teenage boys, be a supportive wife, exercise, cook gourmet meals (okay, just meals), and deal with this cancer stuff? Isn’t that asking a lot of me, God? I don’t recall signing up for super human status.

Next stop: The bright lights of the Operating Room. I told myself the surgeon will remove the lump so I can soon be back in the middle of the crazy newsroom and get on with the rest of my life. How’s that for being positive?

July 9. I was wheeled into the OR, for my lumpectomy, feeling very small in my surgical hat, rumpled blue hospital gown and booties. Under the bright lights, I searched for details that could distract me. After complimenting the surgeons and nurses on their customized surgical hats, I was suddenly terrified. Staff in the OR must be used to this sudden switch from friendly banter to “Wow, this is really happening… what, no more time for chit chat?” I barely had time to picture my boys’ impish faces, I prayed, and then it was lights out.

First huge relief: I did wake up again! The surgeon had removed the lump, some surrounding the tissue and three lymph nodes. 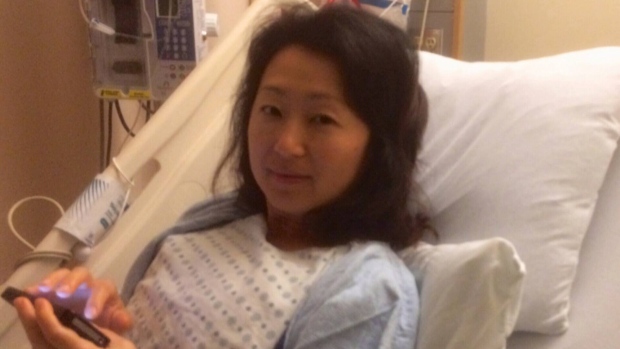 Next thing I know, they’re sending me home. Whoa, this seems pretty heavy duty to be called day surgery. I don’t even get a pudding or light snack?

I went home that day with heavy bandages on my left breast and under my arm. I felt like I was wearing a huge white chest shield. I was scared at what my post-op breast looked like under the shield. I know, it sounds wimpy. When you have cancer you’re allowed to be a chicken about even the small things. I include my breast in the “small things” category. Being scared is natural. They tell you that in all the brochures they give you.

They don’t tell you everything though. Like, how you can become a prisoner in your jogging bra. Women are encouraged to wear soft sports bras after the bandages are removed. I had this cute mauve number my sister bought me. I thought it would help me feel more normal to wear it. After the lymph nodes were removed, I couldn’t move my left shoulder normally – that makes it tough to navigate a pull over bra. Why don’t they make trendy yoga bras with clasps in the back? Instead, they all have fancy crisscross or racer backs and are called Energy or Flow, but they can ensnare you.

I did manage to get it on, but taking it off was another matter. All I wanted to do was take a shower, but the sturdy elastic was like a straitjacket. How would I get it over my head without great pain? There was no breast cancer support line that could help me out of this trap. What would I say? “Help. I’m stuck in spandex and I can’t get out.” After calming down, I managed to gingerly pull a Houdini. I was out! To this day, the sight of a pull-on sports bra can trigger flashbacks.

I became Mi-Jung Antioxidant Lee. In between my painkillers, I inhaled everything from kale omelettes to chia smoothies. Blueberries were never far away. My mother and sister became cooking machines, providing a steady diet of cancer-fighting food. My dad became urban farmer extraordinaire – harvesting from his sunny East Vancouver backyard daily for his daughter. Neighbours and friends generously offered help. Every meal we didn’t have to cook was like manna from heaven.

As a journalist, I much preferred crafting other people’s stories to wrestling with my next chapter.

The pathology report declared Ductal Carcinoma In Situ (DCIS for short). My cancer was stage 1. But there was still a scattering of DCIS, potentially pre-cancerous cells, in the breast tissue around the tumour they had removed. I’d be going under the knife again.

I asked my husband how he would feel about this scarred, dented breast after the second surgery. He said, “I’m in love with you – not the breast attached to you.” One of his best lines. Ever. Men – take note – feel free to re-gift that line the next time a loved one asks about a body part.

August 7. It was our 20th wedding anniversary. The surprise trip planned by my husband was trumped by another trip to the operating room. The only frequent flyer points I was racking up were at Mount Saint Joseph’s Hospital. The second lumpectomy would thrust me back into slow motion again. I tried telling myself: Watching hummingbirds tussle over the backyard feeder really can be interesting.

More decisions loomed. The mastectomy I had been trying to avoid seemed inevitable.

Hey, I thought my cancer was stage one. A third surgery seemed like an awful lot of work for stage one.

Then there is Angelina Jolie, who had a preventative double mastectomy and emerged looking as glamorous as ever. Was I supposed to be encouraged by the fact a Hollywood star makes it look so easy?

What did encourage me was talking to normal women about their experience. I went for long walks and bike rides with two friends who had breast cancer. It was my Cancer Club. As depressing as that sounds, it was a source of strength and laughter. We talked about watching funny shows at night and not searching scary terms like “necrosis” online. We pledged not to read the obituaries.

Can you spare some fat?

Take fat from another part of the body and reconstruct your breast. My surgeon was explaining this was one of the options for reconstructive surgery after a mastectomy. I wasn’t sure I was hearing right. Moving fat from where you don’t want it, to where you do. Why was I only hearing about this now?

I was starting to wrap my head around the fact that I was going to have a mastectomy and reconstructive surgery at the same time.

As for using tissue from your own body to rebuild your breast – it sounded good in theory but the doctor said it wouldn’t work for me. My friends joked they would donate some of their fat. Despite their offers, I was going with the plastic option -- a silicone implant would become New Lefty.

My lighthearted tone makes it sound like I was forging ahead with pluckiness and strength. I tried. People called me brave.

But as I lay in the operating room again in October, I couldn’t channel my inner Angelina Jolie. The nurse who saw the tears streaming into my ears passed me the Kleenex and offered her hand – apologizing it was cold. I didn’t mind – clutching it before the anesthetic did its job.

After the drainage tubes were removed, I noticed a strange swelling in the cleavage. What was this? Would this swelling, left unchecked create a uni-breast? A frantic internet search netted no clues.

I went to my plastic surgeon for answers.

“Not too many patients request a third breast,” she said. It was great having a doctor with a sense of humour. She assured me I was not turning into a mutant. It was a seroma – swelling caused fluid collection. She poked the seroma with a needle and drained away my fears.

Soon after, the bandages were off and the pathology report was in. They did not find any more cancer. I would not need chemotherapy or radiation. This email update to friends prompted replies with multiple exclamation marks and super sized font. I briefly wondered if this meant the end of meals magically arriving at our door.

“I couldn’t be happier with how you’ve healed,” said my surgeon. I wanted to hug her.

It was pelting rain and dark as I drove home thinking of her words. Couldn’t be happier. I agreed. There’s nothing like a cancer diagnosis to tone down the whining and amplify the gratitude. I didn’t care that rush hour traffic on Oak Street was hardly moving. All I noticed was a brightly lit soccer field, with children chasing the ball, not worried about the storm.