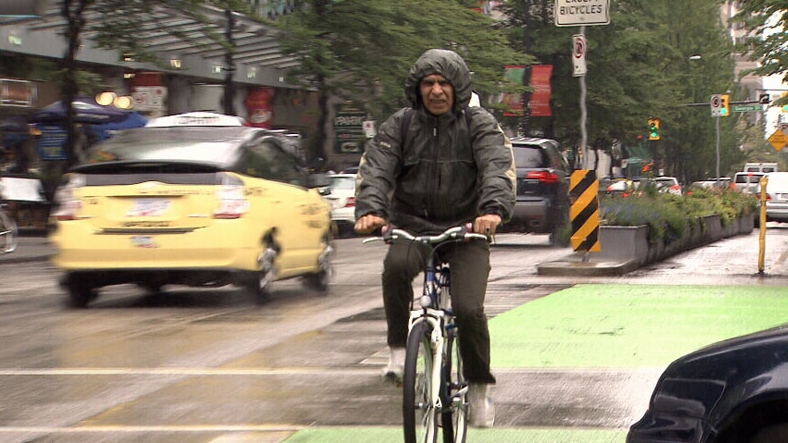 More than half of Metro Vancouver residents are on board with separated bike lanes, but some are worried about access to parking, a new survey says.

“People improve their health, the air quality, and often have a more affordable lifestyle when they cycle. Those things are all really top of the mind,” she said.

The survey also found some areas of concern. Thirty-seven per cent of those surveyed strongly agreed that separated bike lanes make parking more difficult, and 24 per cent said they and hurt businesses as a result.

O’Melinn says when it comes to finding parking it’s not about getting rid of the bike lanes, but signage pointing out parking needs to be improved. And the perception that less parking means less business doesn’t account for the growing number of shoppers who aren’t driving.

“A lot of surveys show that in popular shopping destinations, the majority of shoppers come by transit, biking, and walking,” O’Melinn said.

According to her, cyclists also have an easier time stopping and browsing than cars do, and take up less space.

Vancouver currently has two main separated bike path routes, one crossing the Burrard Street Bridge and the other extending across the Dunsmuir viaduct.

In mid-June, the city passed the proposal to construct two additional separated bike routes along the Canada Line Bridge at Marine Drive and downtown at the north end of the Cambie Street Bridge.

Proposals generating controversy over partial traffic closures are at Point Grey Road between Alma Street and MacDonald Street and the busy Adanac Bikeway along Union Street.

Both proposals could see a loss of parking and increased traffic density in surrounding areas, critics say.

Despite their concern, those surveyed liked the idea of a bike share program that the city is considering.

Seven out of 10 Metro Vancouver residents, cyclists, motorists, and transit-users alike welcomed the idea of having a network of shared bicycles available for short-term use.