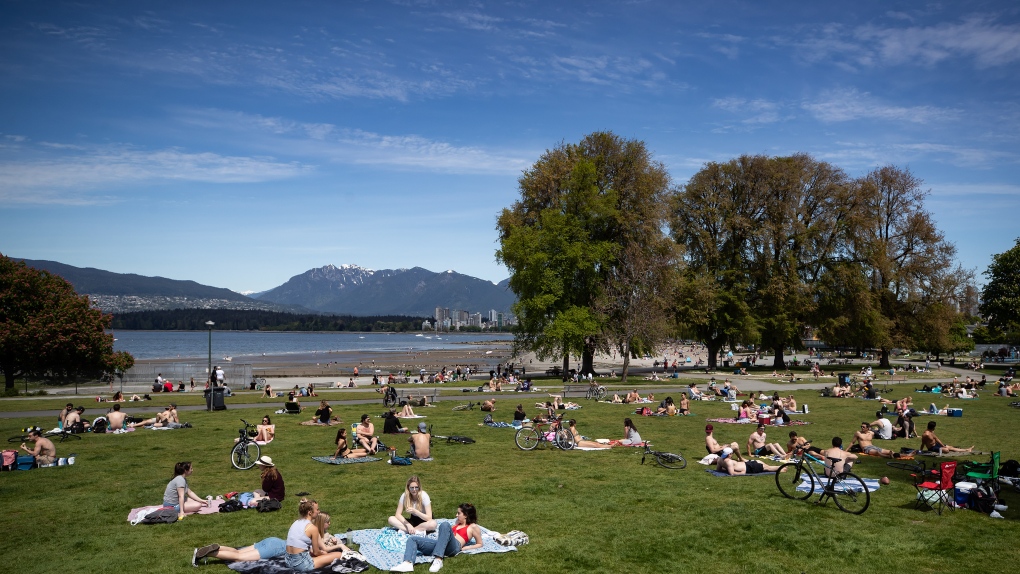 People sit and lie in the sun at Kitsilano Beach Park on Saturday, May 9, 2020. THE CANADIAN PRESS/Darryl Dyck

After weeks of unseasonably cold and rainy weather, including some days that saw record-breaking low temperatures, it appears Metro Vancouver is finally in for a stretch of sun.

Environment Canada's seven-day forecast for the region predicts sun Friday through next Thursday, with temperatures getting up to 20 C later on in the week.

For the long weekend, it's not expected to get warmer than 18 C. Friday is predicted to be the coldest day, with highs of 15 C and lows of 8.

The sunny weather is likely a welcome relief to residents who have otherwise endured weeks filled with rain and cool temperatures.

Just last week, several minimum temperature and precipitation records were broken across the province including in Vancouver, West Vancouver and Victoria.

At the start of this week, Lower Mainland and Vancouver Island residents were warned of strong winds and heavy rain. Meanwhile, drivers travelling between Metro Vancouver and the Interior were told to watch for snow on their route.

But one positive of the cold and rain is that they may help dampen natural wildfire fuel across the province. Officials have warned, however, that warmer weather leads to a melting snowpack, which can prompt flooding.

David Campbell, with the River Forecast Centre, said earlier this month it's a combination of melting snowpack and extreme precipitation that exacerbates flood risk. In fact, Campbell said, weather is what makes up half to two-thirds of flood risk in the province.

"It's really going to be the weather that determines how that snow melts," he said. "We really do need to see a combination of both (melting) snowpack and extreme weather to drive extreme flooding."

Parents of boy, 2, among dead at Fourth of July parade shooting

Aiden McCarthy's photo was shared across Chicago-area social media groups in the hours after the July 4 parade shooting in Highland Park, accompanied by pleas to help identify the 2-year-old who had been found at the scene bloodied and alone and to reunite him with his family. On Tuesday, friends and authorities confirmed that the boy's parents, Kevin McCarthy, 37, and Irina McCarthy, 35, were among seven people killed in the tragedy.