Union representatives who helped secure the deal in a marathon bargaining session last week boasted that the agreement contains "historic gains" for workers.

"Metro Vancouver transit workers will see significant improvements to wages, benefits, and working conditions as a result of this new agreement," Unifor national president Jerry Dias said in a statement.

With the deal ratified, the union shared specific details with the public Thursday night for the first time.

The deal sets out guaranteed minimum rest and recovery breaks of 45 minutes – a first for the union – and stronger contract language to ensure bus drivers have access to washrooms.

The union said the gains will make "significant progress toward reducing the wage gap with Toronto's transit operators," who earned about $3 more than drivers in Vancouver.

The deal ended nearly a month of strike action by Unifor, whose members had been without a contract for eight months.

Unifor local 111 president Balbir Mann thanked the members of the public who supported them throughout the negotiations.

"Our members heard kind and supportive remarks from passengers every day since the uniform ban began," Mann said in a statement. "When we work together to improve the region’s transit infrastructure, everyone wins."

Their employer issued a brief statement confirming its board of directors has also ratified the deal.

"Our hard-working and dedicated employees will benefit from a balanced and competitive package which improves wages, benefits, and working conditions," CMBC president Michael McDaniel said.

"We’ve always been focused on providing quality transit services and delivering an unprecedented service expansion plan for this region. That important work will continue for the hundreds of thousands of people who rely on our system each and every day."

Unifor had threatened to launch a full-scale strike if a deal wasn't reached by midnight last Wednesday, which TransLink estimated would have resulted in an extra 36,000 vehicles on the road the following day.

The two sides met at least a half dozen times over the course of the day, and eventually extended the midnight deadline by half an hour before finally reaching an agreement.

Metro Vancouver hasn't had to deal with a full bus strike since 2001, when ridership was said to be about half what is it today. 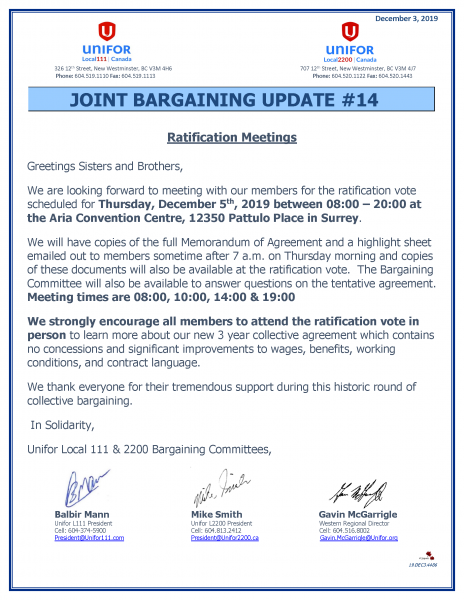