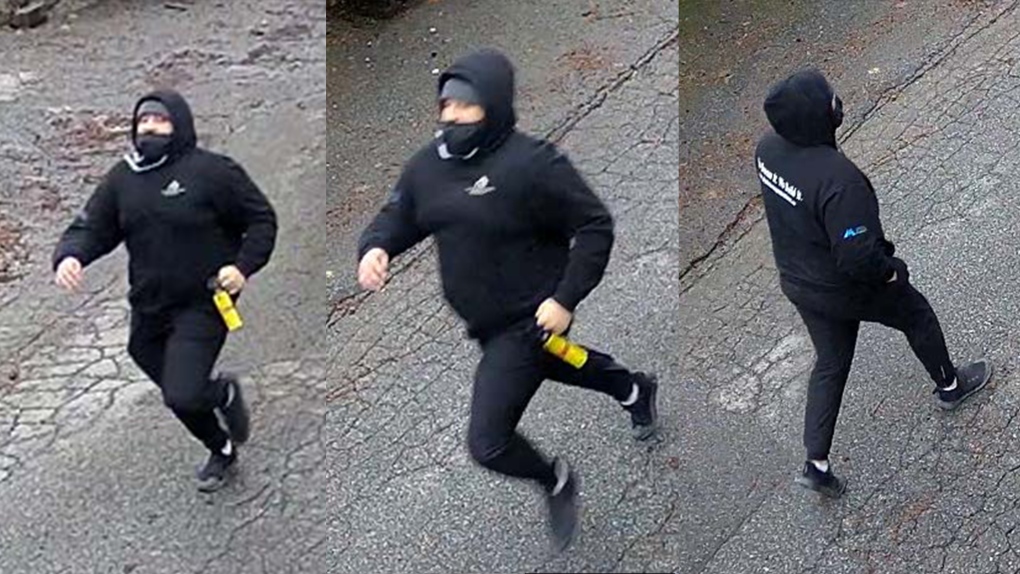 Police say the suspect in a Dec. 29, 2020 road rage incident in Burnaby, B.C. was wearing a black shirt with the slogan "You dream it, we build it" on the back. (Handout)

VANCOUVER -- Police are searching for a suspect after two men were allegedly pepper-sprayed during a road rage incident in Burnaby, B.C. last month.

Authorities said the suspect parked his truck in the 4100 block of McGill Street shortly before noon on Dec. 29, then walked over to pepper-spray the victims.

It's unclear what prompted the alarming attack, but Burnaby RCMP said the victims "believe the incident stemmed from a lane change earlier in the day."

On Wednesday, authorities released several images of a suspect in the hopes that someone will recognize him and come forward.

He's described as a "possibly Caucasian" man in his late-20s to mid-30s who is 5'8" to 5'10" tall. He was dressed head to toe in black, with a distinctive logo on the front of his shirt and the words, "You dream it, we build it" on the back.

"We believe someone will recognize this suspect or the crest and slogan on his hoodie," Cpl. Mike Kalanj of the Burnaby RCMP said in a news release. "This was not a quick reaction, the suspect had plenty of time to think about his actions and he chose to respond in this violent manner."

The suspect vehicle is described as a newer model F150 Supercrew with tinted rear and back windows, a chrome front bumper and six-spoke brushed aluminum rims. There also is a "partial logo on the front passenger side of the vehicle that appears to be covered," according to the RCMP.

Authorities asked anyone with information on the case to contact the Burnaby RCMP detachment or Crime Stoppers.