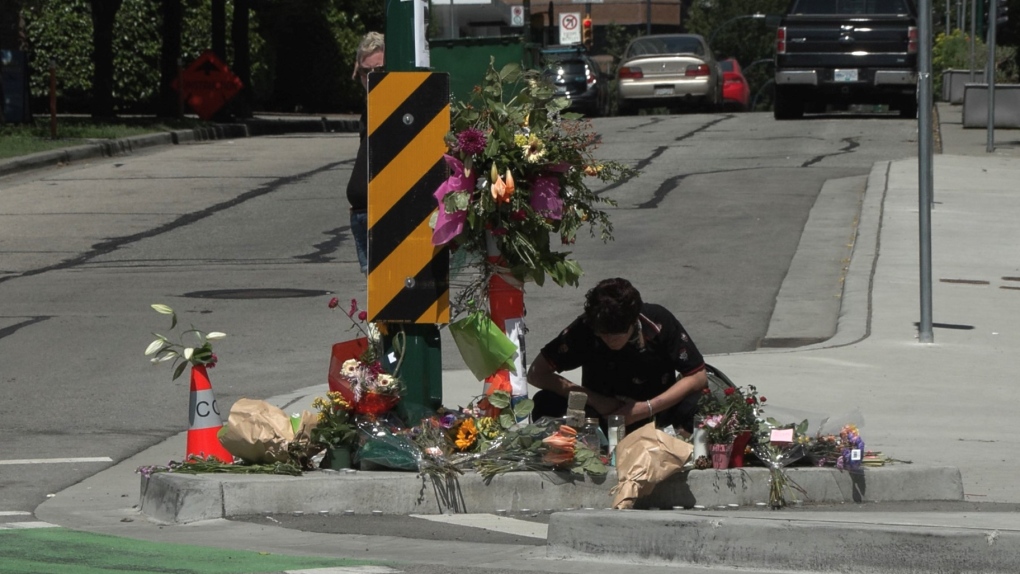 A memorial is seen at Pacific and Hornby streets in downtown Vancouver, where a 28-year-old cyclist was killed on June 29, 2022.

Days after a 28-year-old cyclist was killed by a dump truck in downtown Vancouver, a memorial ride is being planned in his honour.

The victim of Wednesday's collision at Pacific and Hornby streets has been identified as Agustin Beltrán, a PhD student at the University of British Columbia.

A memorial of flowers and candles has been growing at the intersection since the accident.

"We are shocked and devastated over Agustín’s death," Francois wrote. "We extend our deepest sympathies to Agustín’s family, friends, and peers. We share in their grief today, and in the days to come."

Counselling services are being provided to "any community members impacted," the director added.

On Sunday, Beltrán is being remembered with a group bike ride that's scheduled to begin at 11 a.m. at the Vancouver Art Gallery.

Meanwhile, Vancouver police are continuing to investigate the crash. Authorities said the driver has been co-operating with their investigation, and they do not believe speed or impairment were factors in the collision.

A damaged blue and black bicycle could be seen underneath the wheels of the dump truck in the aftermath of the accident.

Police asked anyone with information on the accident, or dash-cam video taken in the area at around 7:30 a.m., to come forward.

Cycling friends: On Sunday morning there will be a memorial ride for Agustin Beltrán, who was tragically killed while riding his bicycle in Vancouver on Wednesday. Memorial ride, not protest. Family would like to see a big turn out. Follow @Lucyincanada for details. #bikeyvr