LANGLEY, B.C. -- A memorial for a teenager that died of an apparent overdose has been unveiled at the Langley Sportsplex.

Carson Crimeni’s hockey jersey is now on display next to one of the ice rinks where he spent many hours practicing with his team, the Eagles.

The 14-year-old was found in severe medical distress near the Walnut Grove Skate Park on Aug. 7, 2019.

That evening, someone called 911 to report a social media post that appeared to show the boy in trouble. Two Langley Mounies responded, but were unable to find him after a half hour of looking.

Nearly two hours later, Crimeni was found barely breathing by a group of teenagers more than half a kilometre away in the skate park.

He was rushed to hospital, but did not survive.

“He was such a good friend to me,” said Sam Royal, one of his former Teammates. “He really helped me out with a lot of things and made me the person I am today.”

Videos circulating on social media appeared to show Crimeni overdosing, while those behind the camera stood by and taunted him.

“I’d like to see them go to jail. That’s where they belong. What happened wasn’t an accident, it was intentional,” said Aron Crimeni, the boy's father.

The teen’s family believes that peer pressure lead to his death.

They hope the anti-bullying message displayed on his memorial shadow box, “Play and Be Kind” will serve as a reminder of the danger of bullying. 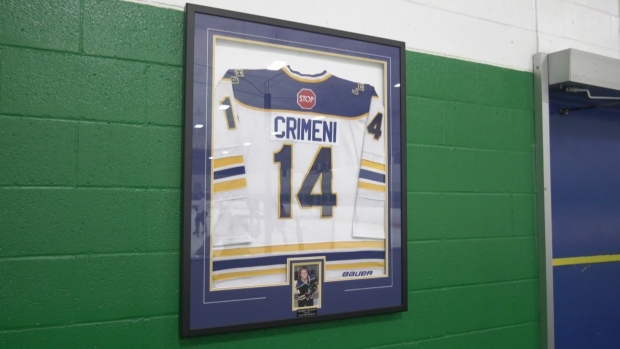 “If it helps one family talks to their kids, (or) kids talk to kids about the dangers of bullying, certainly the dangers of drugs, I think it’s worth it, “ said Darrel Crimeni, Carson’s Grandfather.

Dozens of people filled the arena Friday morning to see the jersey be hung.

“To see that many people turn out for Carson and to see this happen today, it took my breath away. It was really emotional,” said Chris Crowell, whose son played hockey with Crimeni for years.

He and his wife organized the memorial to show support for the family.

Many in attendance donned pink “Play and Be Kind for Carson” shirts made by the teen’s grandfather, a tribute to Pink Shirt Day on Feb. 26.

“I gave them all away, they went very fast. I could have printed hundreds, but maybe next year we’ll do a fundraiser,” said Darrel Crimeni.

He’s also pushing for the Township of Langley to rename the skate park after Carson, so the gravity of what happened is never forgotten.

A change.org petition to rename the park has more than 3,800 signatures.

“People really need to realize that drugs and bullying is not a joke. It took his life,” said Isabella Griffiths, the teenager's older sister.

“If we keep talking about it, keep reminding people that it was a real thing that happened then maybe people will make better choices.”

The Independent Investigations Office was asked to investigate police involvement in the incident and to determine whether any action or inaction on the part of the police played a role in Crimeni's death. The IIO report found responding officers did everything they could.

Crimeni’s Father said the RCMP has forwarded the results of its own investigation into the boy's death to the Crown counsel prosecutor’s office, which will decide whether to pursue charges.