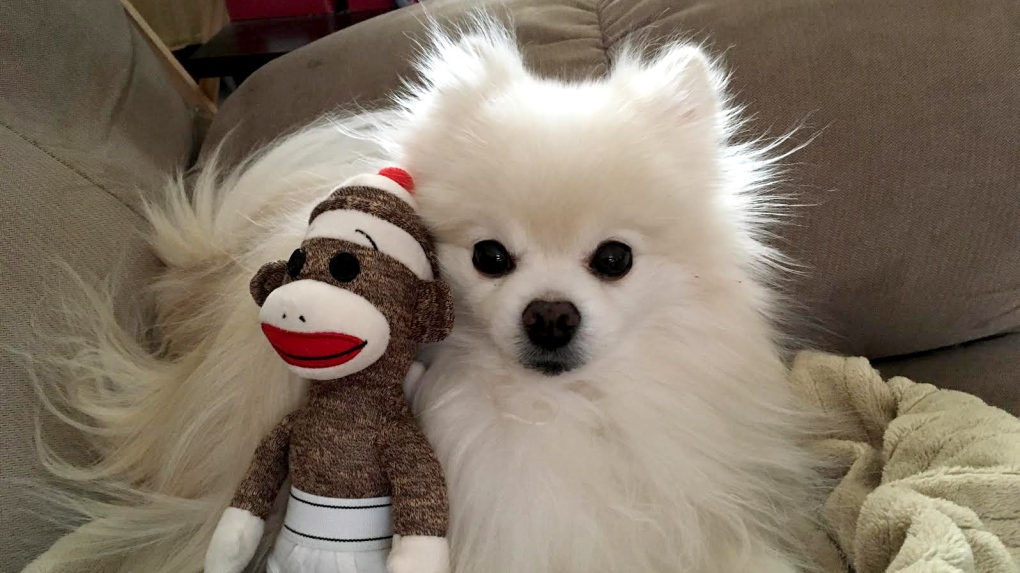 Yogi the Pomeranian will be featured on a Jones Soda label for pineapple cream soda. (Submitted: Gilles DeCruyenaere)

VANCOUVER -- An Abbotsford man's Pomeranian has been selected to be featured on a Jones Soda label.

Gilles DeCruyenaere's 10-year-old dog, Yogi, has been chosen to be the spokesmodel for the company's pineapple cream soda flavour.

"I've always thought it would be cool to get a photo on a Jones Soda bottle and I'd submitted some before a few years ago and nothing came of it," said DeCruyenaere. "But then about a year ago I took a photo of Yogi eating ice cream at the park and I thought it would be good to send in with a batch of other ones."

The company allows people to submit photos to an online gallery to be considered for use on their bottles. Both staff and members of the public can then vote on their favourite images.

DeCruyenaere said he received a letter from the company in November saying Yogi's picture had been selected. He also received two sample copies of the label with Yogi's photo. And even though Yogi has never tried pineapple before, DeCruyenaere thinks it's an appropriate flavour that matches his dog's personality.

"It's kind of funky and funny and I just imagine it's something he would enjoy," he said. "He really likes strawberry milkshakes, so pineapple cream soda sounds like something he'd like."

The bottle is not on store shelves just yet, and since the company uses several different photos for each flavour, there's no guarantee DeCruyenaere will be able to get a bottle with Yogi's picture on it when he heads to the grocery store.

"If you have a photo on a Jones Soda label, you have to be sort of on a scavenger hunt, constantly looking around trying to buy one," said DeCruyenaere.

While he isn't receiving any financial compensation for his photo being used on the bottle, DeCruyenaere is quite happy that the photo of his dog will be widely seen. But it's not Yogi's first brush with fame. DeCruyenaere does stock photography, and the proud owner has submitted Yogi's picture to be featured in several books about pets and Pomeranians.

"He's super fluffy and cute and cuddly," he said. "He's a super smart little dog. We got him when he was eight weeks old and he's pretty much like a son to me."