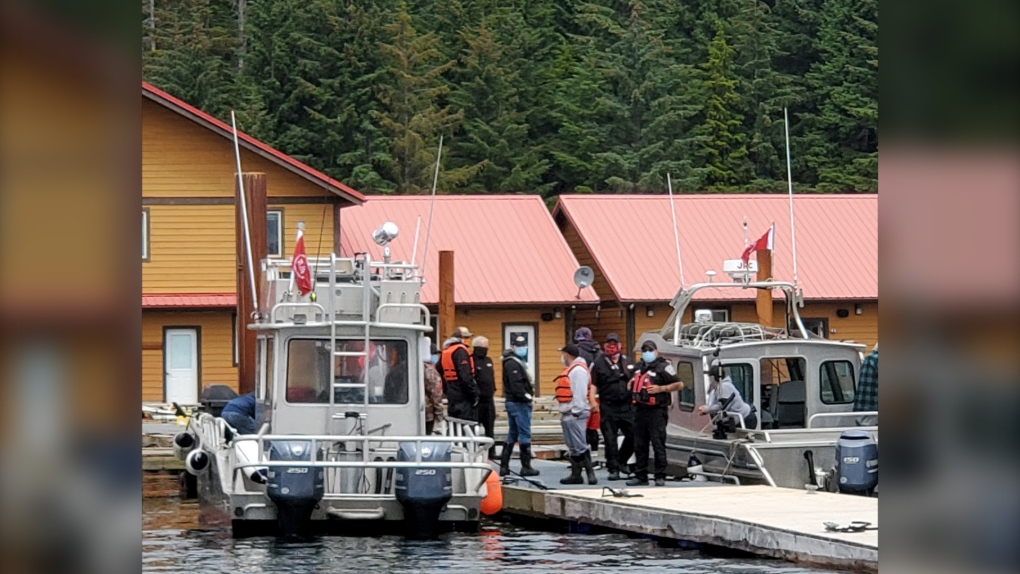 QUEEN CHARLOTTE, B.C. -- A group of Haida matriarchs say they plan to occupy two ancient villages on Haida Gwaii after two fishing lodges decided to reopen on the remote archipelago despite objections from the First Nation.

The matriarchs, known as Gaandlee Guu Jaalang or “daughters of the river,” say in a statement the Queen Charlotte Lodge and West Coast Fishing Club reopened as a local state of emergency remains in effect because of the COVID-19 pandemic.

“Haida Gwaii is a remote community with limited health-care services and only two ventilators,” the statement says. “One case would devastate our communities.”

The statement says the matriarchs are upholding Haida law through the occupation of the villages, Jung and Sk'aawats.

Both the fishing lodge and club say they are fully complying with orders and guidelines issued by the B.C. government, health authorities and WorkSafeBC.

Brian Clive, vice-president of sales and corporate development for the lodge, said it has had several meetings with Haida leadership and developed plans so that workers do not go into town or anywhere near a Haida community. It also has medical staff on site and if a COVID-19 case were to develop, there's a plan in place to evacuate the affected person by air to Vancouver.

“We have gone to incredible lengths to avoid any contact with the communities and therefore have created what we call a zero-risk chance of contamination in the communities,” he said.

The lodge expects about 80 guests at a time, down from the typical 125, he said. None will be travelling from the United States because the border is closed, he said.

President Brian Legge said the West Coast Fishing Club is remotely located about 83 kilometres from the nearest community and only accessible by boat or air. It also has an emergency evacuation plan in place.

“First and foremost we would never put the health and well-being of Haida Gwaii communities and residents at risk and equally as important our staff and clients,” he says in a statement.

“That's why we have worked hard and gone to significant expense to eliminate all contact with the residents of Haida Gwaii and their communities through direct helicopter transportation from the mainland to our remote island and back.”

Without the plan, the club's employees would have been out of work and the business faced possibly unsustainable losses, Legge said.

The club is continuing to speak with the council of the Haida Nation, he added.

Duffy Edgars, chief councillor of Old Massett Village, said he supports the matriarchs and expected 20 to 30 people to occupy the villages. He said he didn't expect any interactions with lodge staff.

“We're just occupying our land and doing some fishing,” he said.

Haida member Deana Young, who was on her way to support the matriarchs, said the community is following physical distancing protocols, while children have not returned to school and are not seeing their elders.

“One person coming from outside our region is one person too many,” said Young.

The occupation of the land is an exercise of Haida rights to the land, she said.

“What we are doing is occupying our lands, asserting our rights to harvest the foods that we live on and to ensure food security for our communities,” she said.

This report by The Canadian Press was first published July 10, 2020.