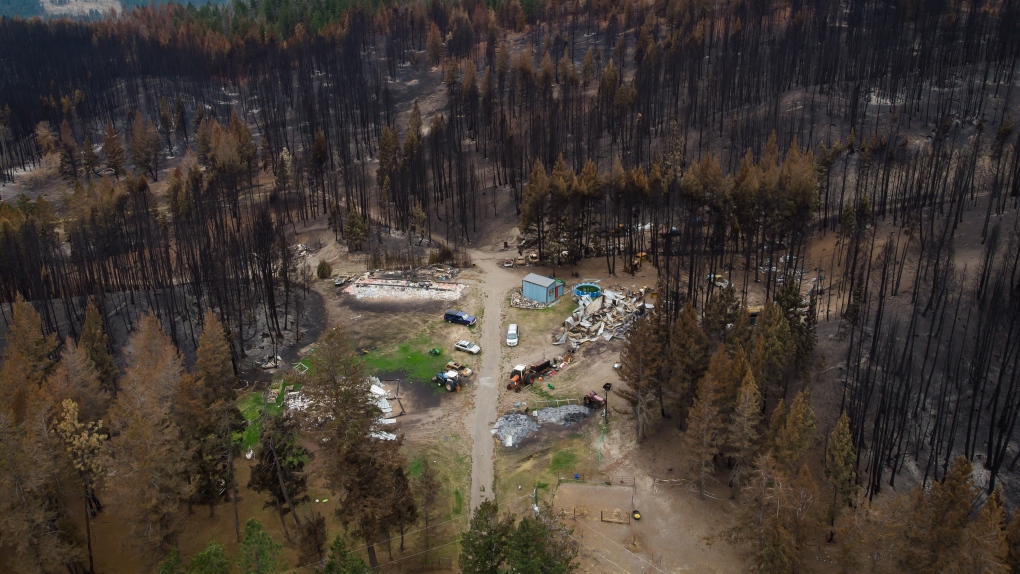 Burnt trees and a property with structures that were destroyed by the White Rock Lake wildfire earlier this month are seen, in Monte Lake, B.C., on Thursday, August 26, 2021. THE CANADIAN PRESS/Darryl Dyck
Vancouver -

One of the largest and most destructive wildfires of B.C.'s 2021 season is now classified as "being held," according to the BC Wildfire Service.

In an information bulletin shared Thursday afternoon, the service said the 83,000-hectare White Rock Lake fire is "not likely to spread beyond determined containment lines."

Fire information officer Forrest Tower told CTV News it’s likely there will still be some “minimal growth” in some areas, but it’s believed the worst has now passed.

“There’s still a lot of wildfire suppression that needs to happen, it’s not out by any means (and) we’ll still have a few weeks of work left on this fire,” Tower said. “But in terms of imminent threat to any structures, critical infrastructure, road access, that’s all at a point where we feel confident with recommending local authorities can allow people back into their properties.”

The wildfire service attributed the development to "significant effort" from its own personnel, as well as First Nations, provincial, national and international partner agencies.

"Over the last 52 days, firefighters and support personnel from around the world have maintained response efforts on the White Rock Lake wildfire," the service said in its bulletin.

"Managing a wildfire of this size and complexity requires the skill and knowledge of many people. At its peak, the fire camp in Vernon housed over 500 people directly engaged in wildfire response."

Tower said just under 300 fire fighters were still staying at the camp, along with support staff, as efforts have not yet finished.

Tower added that communities impacted by the fire can rest a little easier “knowing that where the fire is, is where it should stay.”

In early August the fire devastated the community of Monte Lake, destroying numerous properties and causing conflict between residents who stayed behind to try to battle the blaze and provincial officials upset at their defiance of evacuation orders.

Later that month it also destroyed at least 70 structures in the communities of Ewing and Killiney Beach, along Okanagan Lake. One evacuee who’s home became unliveable called for Premier John Horgan to come see the damage first hand.

Many of the evacuation orders and alerts related to the White Rock Lake fire have now been rescinded, and the BC Wildfire Service advises residents to check with their local authorities for information and support as they return home.