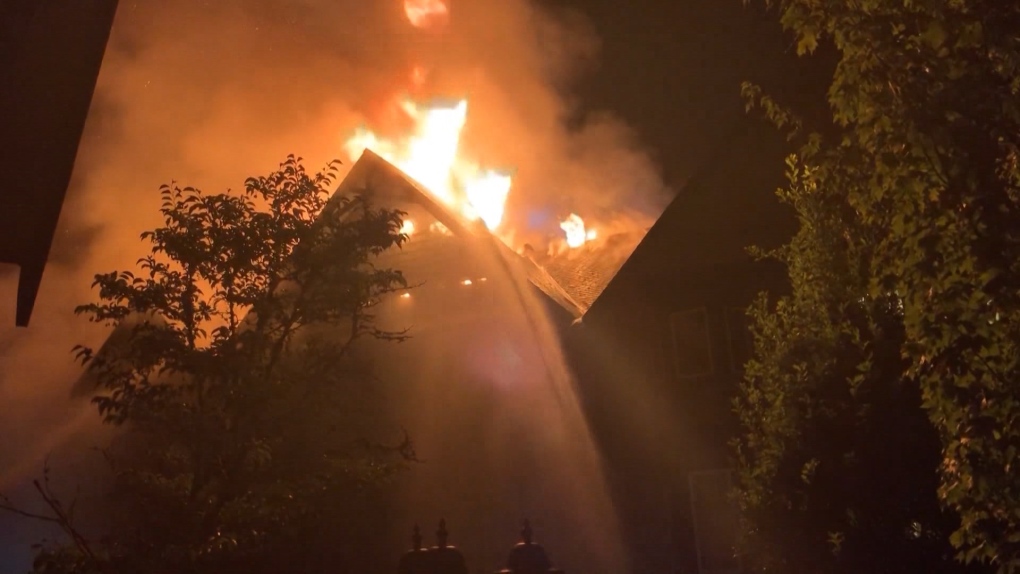 Two units in Mission were completely destroyed in the blaze and three others suffered smoke and water damage on Aug. 20, 2020.

VANCOUVER -- Nearly a dozen people are now homeless after a massive fire inside a townhouse complex in Mission.

The fire broke out shortly after 1 a.m. Thursday morning on Fraser Crescent near Haig Street.

Firefighters arrived within 10 minutes, but several of the units were already up in flames.

Two units were completely destroyed in the blaze and three others suffered smoke and water damage.

“The good thing was all residents were able to get out safely and working smoke alarms were a factor in that,” said Chief Mark Goddard of the Mission Fire and Rescue Service.

“We think the fire started in an end unit, down low in the garage.”

He said two cats went missing in the fire, but it’s believed they were just frightened and are hiding inside one of the less damaged units.

A resident on strata said two other cats died in the fire.

Goddard says it was a challenging fire to fight.

“The really tight access, we had power lines really close to the front building that was had to be cognizant of because of our ladder truck using master streams.”

There were more than 35 firefighters and five trucks on scene at the peak of the fire.

The smoke was incredibly heavy forcing all first responders to wear gas masks blocks away from wear the fire started.

The fire is not believed to be suspicious, but the fire investigator combed through the wreckage at first light to determine an official cause.

The chief says the evacuated residents will be unable to return at least several weeks as the damage is extensive.

They’ve been given temporary shelter through Emergency Support Services.

“It was very bad actually. The front side and the back side it was a full on fire,” said Balkar Sandhu, a resident of the complex.

He was woken up by a neighbour and rushed outside to see the flames.

“They were shooting out of the top pretty high at least 20 feet past the roof tops and then it spread across all the upper attics,” said Sandhu.

He said the heat was very intense.

“That was just an inferno, all the floors. Every floor bottom, top, roof there was flames shooting out.”

Sandhu is grateful for the work first responders did to stop the rest of the complex from catching on fire.

“You can see they don’t care about their lives. They’re here to protect people, protect property, protect lives. They just go straight in it’s amazing. It makes you feel humble.”