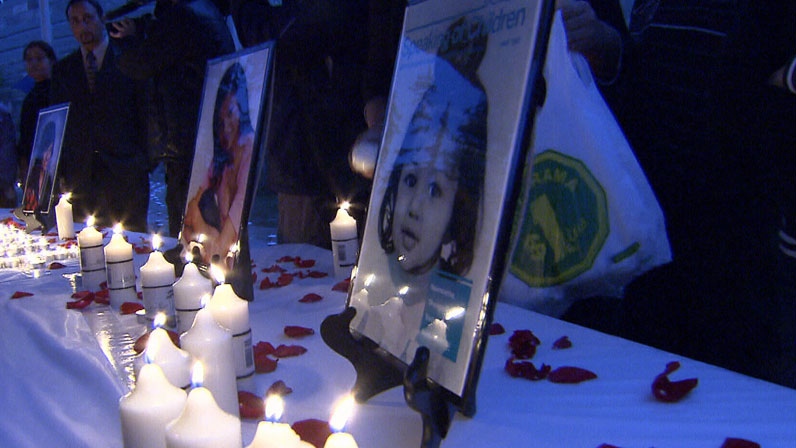 A vigil was held to commemorate the one-year anniversary of Maple Batalia's death. Sept. 28, 2012. (CTV)

The candlelight vigil took place at Holland Park, where a park bench has been built and a maple tree has been planted in Batalia’s memory.

Batalia, a 19-year-old aspiring actress and model, was shot at the university’s Surrey campus a year ago. A murder suspect has yet to be named.

And even though a year has passed, Batalia’s family says it feels like time has stood still ever since she was killed.

“To us it seems like just yesterday she was taken from us,” said Batalia’s sister Roseleen, who describes Maple as a “beautiful soul.”

“She was taken so tragically. There’s no answers, there’s a lot of questions, and there’s no closure. For our family to grieve even properly we need some sort of justice.”

Batalia’s family and friends alleged she was having trouble with a former boyfriend at the time of her death.

Gurjinder Dhaliwal was charged with allegedly assaulting Batalia and others after an incident at a Surrey Tim Horton’s four days before her murder. The charges were later stayed because of a lack of evidence.

Sgt. Jennifer Pound of the Integrated Homicide Investigative Team, who attended the vigil Friday, said the investigation is still active.

“We feel that people have the intimate knowledge, they’re just not coming forward for whatever reason,” she said. “We want those people to put themselves into the family of Maple’s shoes just for a minute. They have gone through a pretty difficult time this past year.”

“Taking away one family member doesn’t just kill that one person, it kills the whole family,” she said. “We’re never going to be the same. For [people with information] to be able to do the right thing, they can breathe some life back into us, so they can give us a second chance and…the proper peace that Maple deserves.”