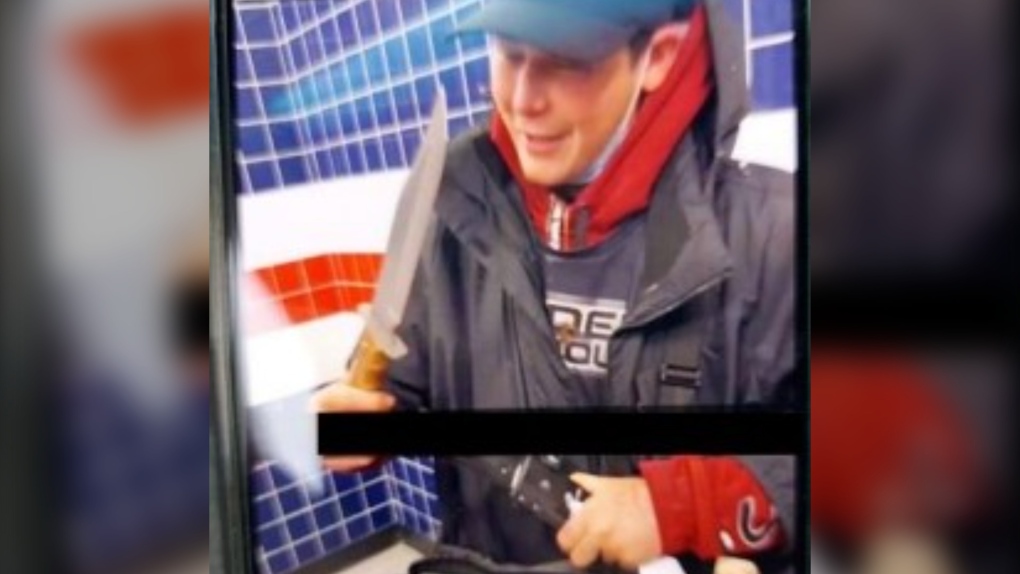 Abbotsford police shared a photo of the suspect holding the knife, and are asking anyone who can help identify the man or provide video from the area to contact them at 604-859-5225. (Abbotsford Police Department)
Vancouver -

Three schools in Abbotsford initiated security procedures Wednesday morning after a student at Yale Secondary School encountered a man with a knife inside a school bathroom.

Police were called to the school at 9:30 a.m., shortly after the student reported the discovery to school staff.

"At no time did the male suspect threaten any students or staff," the Abbotsford Police Department clarified in a news release.

Instead, the man "displayed the knife to show the student," according to police.

School administrators placed Yale Secondary and neighbouring W.A. Fraser Middle School into lockdown, while nearby McMillian Elementary School was issued a shelter-in-place order. The security procedures at the middle and elementary schools were precautionary, police said.

The incident drew "all available on-duty AbbyPD officers" and the RCMP police helicopter Air 1 to Yale Secondary to conduct an "extensive search of the school and surrounding areas," according to police.

Officers determined that the man had left the area. No students were injured during the incident, police said.

"At this time, investigators have confirmed that the suspect departed the area of Yale Secondary by vehicle and was dropped off at the intersection of Gladwin Road and South Fraser Way," police said in their release.

Abbotsford police shared a photo of the suspect holding the knife, and are asking anyone who can help identify the man or provide video from the area to contact them at 604-859-5225.

Wednesday's incident occurred just weeks after the five-year anniversary of a deadly stabbing attack inside an Abbotsford high school.

On Nov. 1, 2016, Gabriel Klein fatally stabbed 13-year-old Letisha Reimer inside Abbotsford Secondary School. Klein also injured a second student, who cannot be named due to a publication ban, during his attack.

Klein was found guilty of second-degree murder in March 2020. His sentencing was delayed until earlier this year as he petitioned the court to be held not criminally responsible for the stabbings due to mental illness.

In July, Klein was sentenced to life in prison with no chance of parole for 16 years.