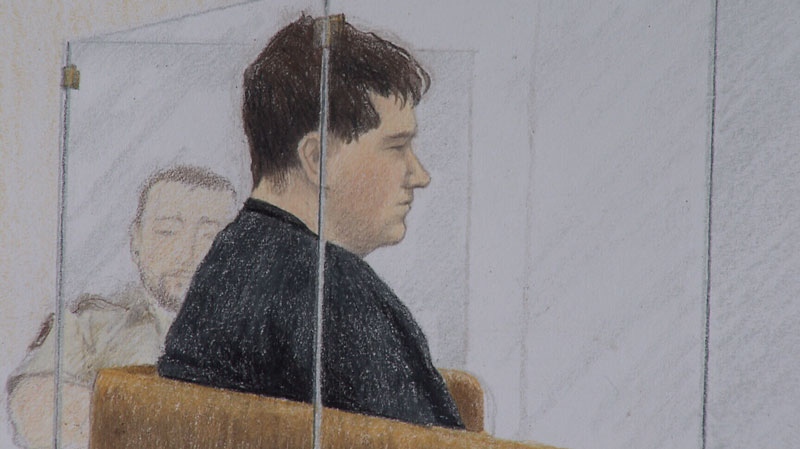 Jordan Ramsay is shown in a sketch at B.C. Supreme Court, where he is on trial for the murder of his father and the attempted murder of his mother. July 4, 2012. (CTV)

A man who admitted to killing his father and severely beating his mother during a psychotic episode last year has been found not criminally responsible.

Jordan Ramsay, 27, was charged with second-degree murder and attempted murder for the November attack that left his father Donald dead and his mother Wendy seriously injured in their North Vancouver home. In B.C. Supreme Court on Friday, Justice Deborah Kloegman found that the schizophrenic young man did not have the mental faculty to be held responsible for the slaying.

“[His] severe illness was not controlled by medication and proves he lacked the capacity to decide whether what he was doing was morally wrong.”

Family members have said that Ramsay believed his parents were aliens at the time he attacked them with either a hammer or a wrench. The court heard evidence from a psychiatrist that Ramsay’s illness had previously been stabilized with the drug Risperidone, but he relapsed when he stopped taking the pills.

A psychiatric report found that the young man was trying to self-medicate with Truehope vitamins, which are marketed as a nutrition-based way to improve mental health.

In her decision Friday, Kloegman said that Ramsay didn’t recognize his mother the night before the attack, and asked her, “Who are you?”

When police arrived at the bloody scene the next day, Ramsay was combative and had to be subdued with a Taser.

"The accused was not affected by the Taser or the pepper spray and continue to struggle with the officer,” Kloegman said.

"When asked if he wanted a lawyer, the accused responded, 'I just woke up to get a glass of water and now I'm here.' When asked again if he wanted to call a lawyer he said ‘I'm just a kid.’"

Ramsay is currently a patient in Coquitlam’s Forensic Psychiatric Institute. Wendy Ramsay is out of hospital but is still recovering from her injuries.