Orr was also found guilty of employing a foreign national, specifically his Filipinio nanny Leticia Sarmiento, illegally and making a misrepresentation that could induce an error in the administration of the Immigration and Refugee Protection Act.

However, the jury acquitted his partner, Oi Ling Nicole Huen, of human trafficking and employing a foreign national illegally.

"My clients are in shock, frankly, they're stunned," said defence lawyer Nicholas Preovolos outside of court, noting the jury apparently believed the allegations against Orr but not Huen.

"It's odd, and it's frustrating for them."

Sarmiento, 40, had worked for Orr and Huen, taking care of their three children since 2007, first in Hong Kong and then, starting in September 2008, in Canada.

During the trial, Sarmiento testified that she was told by the couple that her working conditions would be the same as in Hong Kong, where she had two days off a week and regular hours, and that she would become a permanent resident in Canada after two years.

Sarmiento said that unlike in Canada, she was also allowed to socialize with other people, had her own cell phone to make frequent calls to the Philippines and took the children under her care out of the home on her own.

But she said all that changed when she arrived in Canada, where she was forced to work 16-hour days, seven days a week and also clean the house.

"When they see that the (other) nannies are talking to me, Mr. Orr would approach me and he would tell me there's no need for you to talk to the nannies," she said, describing her past experiences visiting a local community centre.

In June of 2010, Sarmiento called 911 and told responding police officers she needed help, testifying she called the police after an altercation over the type of milk she fed one of the children turned physical when Huen pushed her.

She packed her things under the watch of police officers and was then taken to a women's shelter, the trial heard, but the six-month work visa she travelled to Canada on had long-since expired.

She now works as a cleaner.

During cross-examination, Preovolos pointed to inconsistencies between her testimony at a preliminary inquiry and trial, and in one case noted she said she was never left alone in the house but then remembered being left alone once.

"I struggle to understand how it is that the jury was able to find beyond a reasonable doubt that her evidence was reliable," he said outside court.

Orr is expected to return to court July 10 to set a sentencing hearing and will remain on bail.

Preovolos said the maximum sentence on the human-trafficking charge is life and five years each for the two remaining charges but he'll ask the judge to impose a conditional sentence.

His client is 50-years old, has three daughters under the age of 10, has never been in trouble with the law, is a respectable citizen and is not a danger to the public, he added.

Preovolos said his client will likely ask him to explore whether there are grounds for an appeal.

"There's never been a conviction, I believe, on the human-trafficking offence in Canada," said Preovolos, adding he, too, was surprised and disappointed by the verdict. 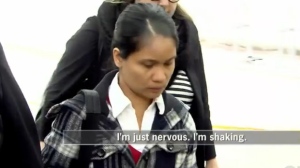