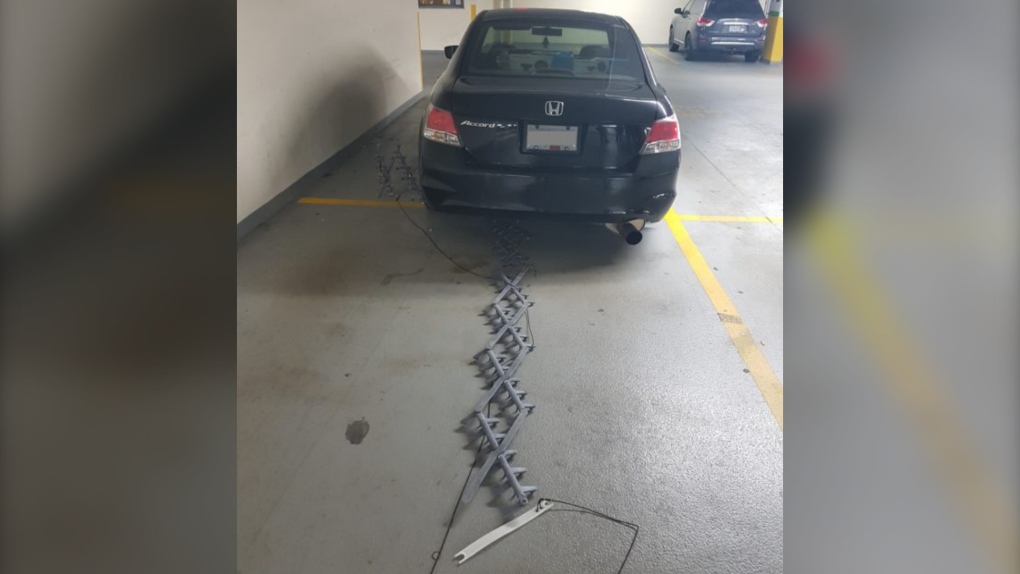 A suspect drove over a spike belt while trying to escape police in New Westminster earlier this week. Police say he ended up dragging the object for several blocks. (New Westminster Police Department)

VANCOUVER -- Police in New Westminster say they have arrested a man who drove over a spike belt while trying to avoid them, dragging the object for several blocks before fleeing on foot.

The incident happened Tuesday morning around 8 a.m., according to a news release from the New Westminster Police Department.

Officers were called to the 300 block of Carnarvon Street, near Merivale Street, after receiving a report of a man sleeping in a running vehicle.

When they arrived, officers recognized the driver as a man who has fled from police in the past and had an outstanding warrant for his arrest, police said. Before attempting to wake up the driver and speak to him, police said, officers placed a spike belt directly in front of the vehicle.

As police approached the vehicle to arrest the suspect, he woke up, shifted into drive and drove over the spike belt, police said, adding that they did not pursue him because of the risk to public safety.

Several blocks west on Carnarvon Street, another officer blocked an intersection and ordered the driver to stop. Instead of doing so, police allege, he drove past the officer's vehicle and continued onto Columbia Street, dragging the spike belt behind him.

"The officer saw the vehicle drive into a parkade, and with the help of citizens was able to quickly locate and safely arrest the suspect, who had fled on foot," police said in their release.

They said the suspect had "several weapons" in his possession at the time of his arrest.

Police said they are recommending several charges to Crown counsel, including failing to comply with a release order, resisting arrest, flight from police and dangerous operation of a motor vehicle.