Man arrested after barricading himself inside Richmond Walmart

VANCOUVER -- Police have arrested a man who is alleged to have barricaded himself inside a section of a Richmond, B.C. Walmart while armed with multiple knives.

Authorities said the incident started around 4:30 p.m. Tuesday when they received a report of an armed man inside the Walmart at Alderbridge Way and Garden City Road.

Staff and customers evacuated the store, and Richmond RCMP said the suspect barricaded himself inside for nearly an hour.

Richmond RCMP, a police dog unit and a crisis negotiator were all involved.

Police say the man was distraught, but the negotiator was able to calm him down and he surrendered peacefully.

A cell phone video obtained CTV News shows a man holding a pair of large butcher knives and yelling at an RCMP officer who slowly backs away while speaking to the man in a calm voice.

Another cell phone video from the store’s main entrance shows officers running up the escalator – some armed with rifles.

"We set out with a plan to evacuate, cordon off the area, and segregate this particular individual,” said Cpl. Dennis Hwang of Richmond RCMP. "Of course we were ready with our Emergency Response Team but we are glad to have had our own crisis negotiator."

Police have not said what charges the man could be facing. 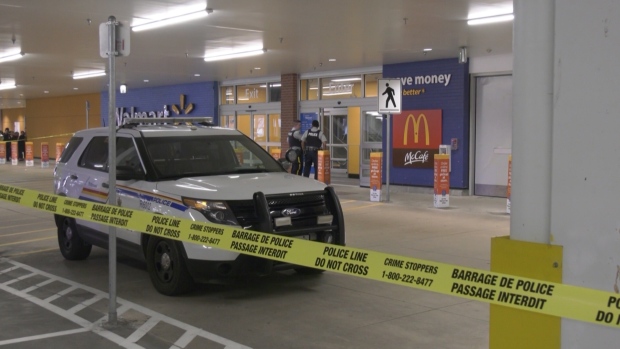