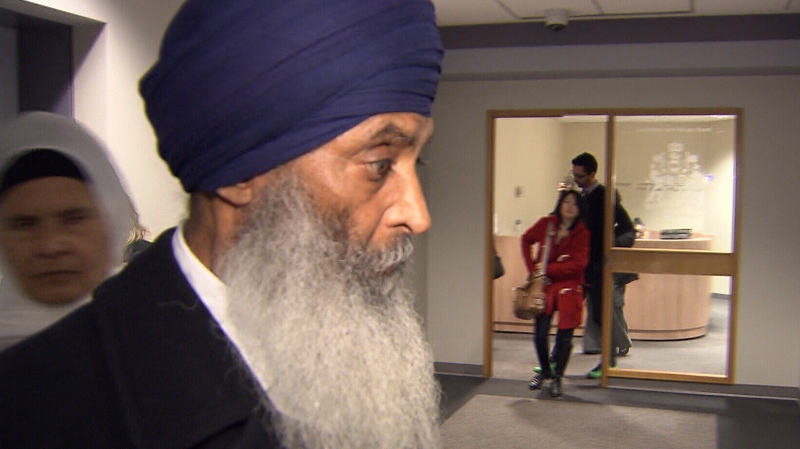 VANCOUVER -- A British man facing deportation from Canada admitted Wednesday at an immigration hearing that he once led the banned Sikh separatist group Babbar Khalsa in England.

But Gurmej Singh Gill testified that his cause was always peaceful and lawful, and the British group was not linked to other Babbar Khalsa groups in various parts of the world.

"I wanted the organization to abide by the British law and do whatever within the law," Gill said at the hearing in Vancouver, through a Punjabi interpreter.

Babbar Khalsa has been linked to the 1985 Air India bombings that killed 331 people on two flights that originated in Vancouver. The group was added to a list of banned terror groups in Canada in 2003.

Canada Border Services Agency wants Gill, once a permanent resident, removed from Canada. The 71-year-old was returning to British Columbia on a family matter when he was stopped by border officials at Vancouver airport last November and ordered to appear before the Immigration and Refugee Board.

Gill, who said he travels to Canada occasionally, testified on Wednesday that he was one of five founding members of Babbar Khalsa in the United Kingdom, and that he led the group from 1984 to 1992.

He said the group was formed after the Golden Temple in Amritsar, Sikhdom's holiest shrine, was attacked in 1984 during a raid by the Indian government to flush out Sikh separatists.

Gill said Babbar Khalsa in the U.K. sought a separate Sikh homeland in India, called Khalistan. His role as leader was to highlight the cause in a lawful manner, he said.

"Whatever injustice had been done with the Sikh community, whatever happened at the Golden Temple, all that was to be highlighted ... by use of legal means," he said.

The hearing heard that in 2001, Gill told border officials at Vancouver's airport that he was leader of Babbar Khalsa International, which was founded in Canada in 1981.

But he insisted Wednesday that he only ever associated with the group in England, which Gill said is a separate organization.

The counsel for Canada Border Services Agency, Kamal Gill, questioned him about a 1990 newspaper article, in which he is interviewed about the movement.

"If necessary, Sikhs would use force in India," Gill is quoted as saying. "But abroad they will engage in political campaigns to win support."

Gill denied making such a statement.

"There was never a need for force anywhere," he said.

Gill told the hearing that the name Babbar Khalsa encompasses the spirit of being "courageous against justice in a peaceful way."

While he is no longer the leader of Babbar Khalsa, he said he remains the prime minister of a group known as the Khalistan Government in Exile.