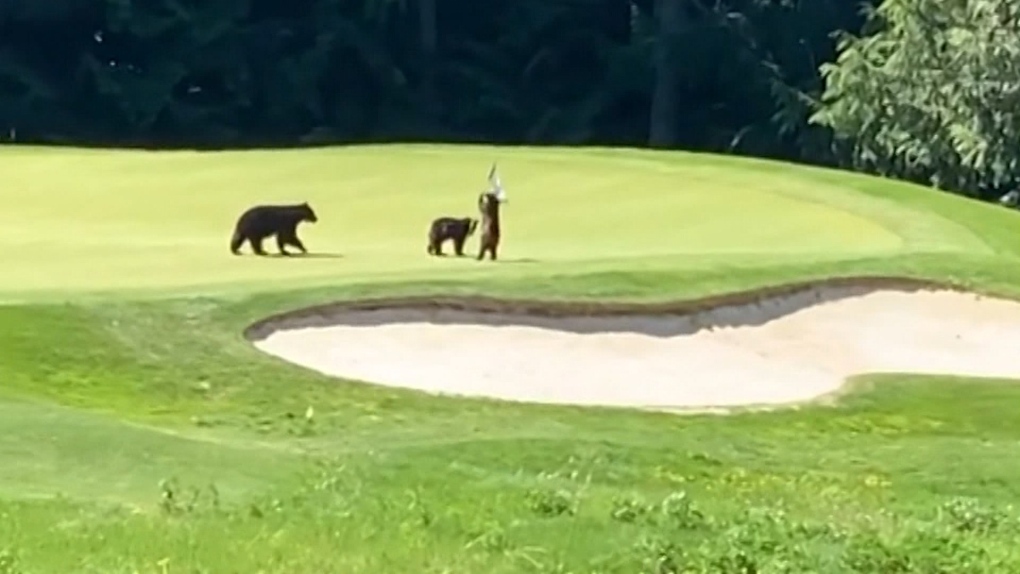 A mother bear and her two cubs play with flag on the fifth hole on Fairmont Chateau Whistler's golf course on June 1. (Zynal Sharoom)
Vancouver -

A group of golfers at the Fairmont Chateau Whistler golf course watched as a mother bear and her two cubs wandered onto the fifth hole and stole the flag.

The intrusion happened at about 10:45 Tuesday morning just as they were teeing off, but no one minded.

“One cub went straight for the flag and the others joined the party,” golfer and Whistler resident Zynal Sharoom told CTV News. “It was exciting and interesting and so cute.”

The party of five didn’t want to interrupt the family fun so they went on to the next hole.

Sharoom moved up to Whistler from Metro Vancouver about 18 months ago and he says seeing bears never gets old. And he’s seen plenty. He runs into bears every day and on that Tuesday, he had already seen six or seven but he says this was the cutest.

“You have to give them lots of room and respect their space,” says Sharoom

There have been lots of bear sightings this spring. In May, shoppers at a Kelowna shopping mall were surprised to see a bear wandering around outside stores. The bear didn’t go into any shops, but walked around until Mounties chased him out of the area.

Earlier in the month, a young black bear found his way into Vancouver and was seen wandering on railway tracks in Gastown. It was tranquilized and returned to the wild.