Loretta Lynn got her big break at a chicken coop in Canada. Here's how.

Loretta Lynn got her big break at a chicken coop in Canada. Here's how.

As country music lovers mourn the death of the legendary Loretta Lynn, a Vancouver historian is recalling how she got her start in the music industry after performing in a converted chicken coop in the city.

Lynn died peacefully in her sleep Tuesday “at her beloved ranch in Tennessee,” according to a statement from her family. The trailblazing star was 90 years old.

Four thousand kilometres away, on a dead-end street in the southeastern part of the city, a small plaque commemorates Lynn's connection to Vancouver.

Rob Howatson, a freelance writer and local historian, told CTV News more about the pivotal role a long-gone and unconventional venue played in her rise to stardom.

While Lynn's life was well-chronicled in the book and movie "A Coal Miner's Daughter," Howatson says the story of the chicken coop is not very well known.

"She has sort of the ultimate rags to riches American Dream story but she also is an extremely talented songwriter and performer and her career and her life went hand in hand," he told CTV News.

"The only thing that's missing from most stories of her life is this little chapter here."

It was 1959 when Lynn performed in a chicken coop that had been converted to a dance hall by a homeowner and musician who "didn’t want to raise chickens," Hawston explains.

Lynn was living across the border in Washington state at the time and the chicken coop had evolved into a music venue.

"Local musicians would get together and play for one another. And a young woman came up from Washington State and her name was Loretta Lynn," Howatson says.

"She had been invited up to this jam session to perform. And in the audience that day was a Canadian music producer."

The producer's name was Don Grashey and his label was Zero Records.

"He thought that Loretta had some potential, so he signed her to his little Vancouver record label," Howatson says. It was there that she would go on to record her first hit single "I'm a Honky Tonk Girl. She was able to use that little record as a calling card in Nashville," Howatson tells CTV News.

"And she went on to have her amazing career."

The chicken coop was demolished in the 70s, but Howatson and others got a plaque installed by the city in 2012 that highlights the role the venue played in launching Lynn's country music career.

She would become the first woman ever named entertainer of the year at the genre's two major awards shows, first by the Country Music Association in 1972 and then by the Academy of Country Music three years later.

With a file from The Associated Press 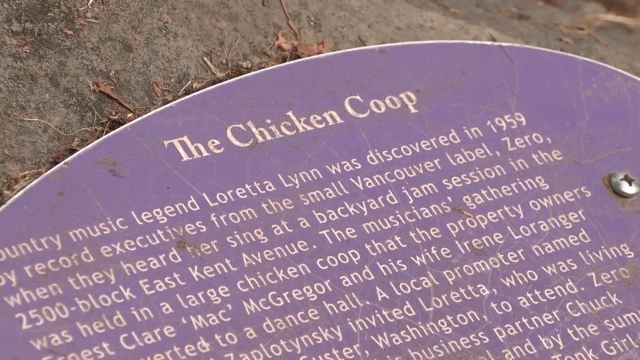 A plaque in Vancouver commemorates the country singer's 1959 trip to Vancouver, which led to her recording her first successful single.