Almost four months old, Quinn Shirley is living in isolation. She hasn’t felt her parents’ hands in hers or their kisses for most of her life. Not directly, anyways.

Quinn has severe combined immunodeficiency (SCID). Also known as "bubble baby disease," it means Quinn has no immune system. A common cold that could have taken her young life is what got her a crucial and early diagnosis.

“There was a lot of fear in learning about it, we kind of felt like we were having a bad dream,” Quinn's mom, Dawn Shirley, told CTV News.

In order to visit her in Victoria General Hospital, her parents must first scrub up, and put on gowns and masks. When they enter the room, they sanitize their hands again, and put on gloves. Only then can they hold her.

“It’s really hard not being able to kiss your baby and having to hold and cuddle her in a gown and mask,” Quinn’s mom said, fighting back tears.

Quinn is being treated by Pediatric Immunologist Dr. Scott Cameron. The doctor said that SCID itself is rare, but the Victoria baby has an even rarer strain of the disease. He says B.C. only sees so-called bubble babies with the same diagnosis as Quinn once every ten years.

Quinn is fortunate that she was diagnosed with the strain early.

“Most children that don't have this identified are really, really, really sick by the time they finally come to hospital at about six months of age, and some children actually pass away at home without anybody knowing they had the disease,” he said.

Babies like Quinn don’t get fevers, because they don’t have white blood cells to fight infections. Early detection is crucial.

“We definitely want to push Quinn's story to help out other families in the future,” her dad, Robert Shirley, said Tuesday.

The Shirleys are now asking the province to include SCID screening as one of the tests regularly performed on newborns. Doctors in Ontario and Nova Scotia already look for the condition. B.C.’s health minister says the province is reviewing its policy. With a disease so rare, the ministry says it wants to make sure the screening works and is cost-effective for taxpayers before making any changes.

'Cure' available south of the border

Quinn is on new medication paid for by the province, and her parents say she is responding well. They even hope to take her for a walk outside soon. But this journey will take them much further. If Quinn is well enough to return home, they will need to scrub their home and make it completely sterile. Beyond that, they are hoping to get to California for what Cameron calls a "cure."

Curative gene therapy is an experimental treatment pioneered by researchers out of the University of California, Los Angeles (UCLA).

In a YouTube video, Dr. Donald Kohn explains the process this way: “We collect some of the baby’s own bone marrow isolate the stem cells, add the gene that they’re missing that their immune system needs and transplant it back to them.” He goes on to say all 18 kids who’ve had the treatment have survived.

The treatment is expensive and in demand, and Cameron says it has a much higher survival rate than a traditional bone marrow transplant. The Shirleys are on a waitlist for curative gene therapy, and hope to get Quinn treated later this year. They’re asking the province to cover the costs.

“We really hope that this treatment will work for us so we can put this whole nightmare behind us,” Quinn's father said.

What the first time parents really want is to hold their baby once again, without gloves or masks on. And maybe even take her for a short walk outside the hospital room she’s called home for most of her young life.

Family members have set up a Go Fund Me page to raise money for Quinn and her parents. The Shirleys are on maternity and paternity leave from work at the moment, but will likely need to take time off to care for Quinn in the future.

The page also encourages anyone who is willing to add their name to the stem cell registry to help others in need of a transplant. 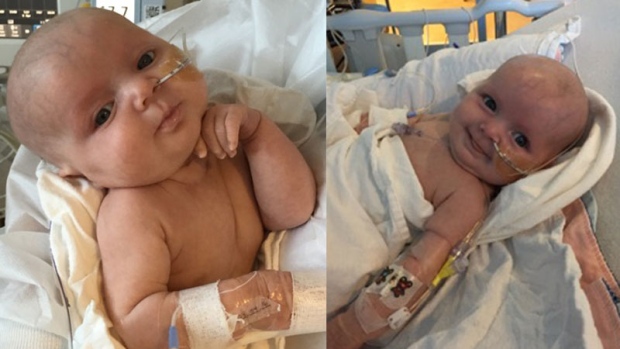