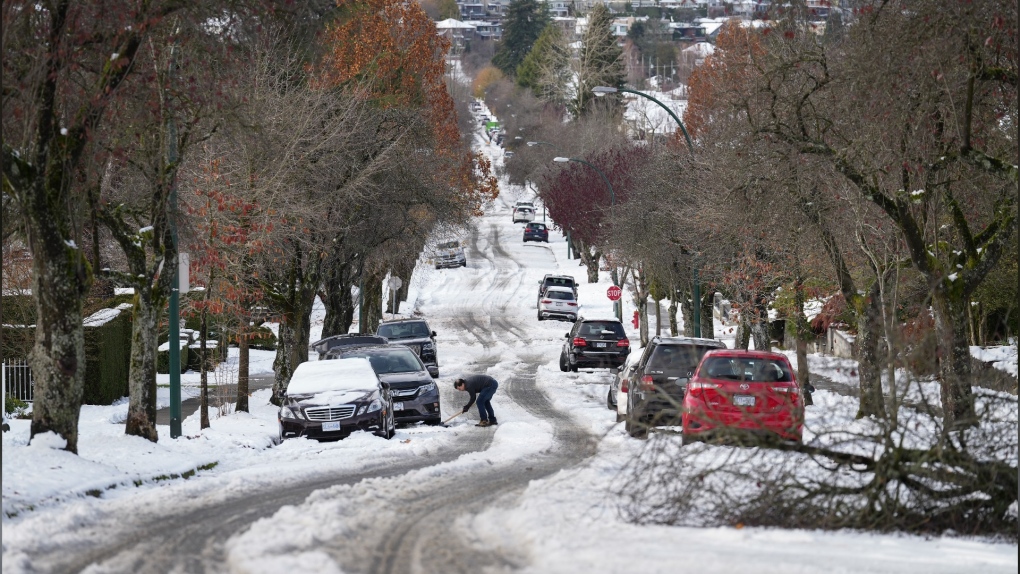 A man digs out snow from under a car stuck on a street in the aftermath of a snowstorm, in Vancouver, B.C., Wednesday, Nov. 30, 2022. THE CANADIAN PRESS/Darryl Dyck.

British Columbians should brace for more snow this week, according to special weather statements issued by Environment and Climate Change Canada.

Both Metro Vancouver and the Fraser Valley can expect to see light snow start to fall Tuesday morning, bringing the risk of “patchy freezing drizzle” the federal agency warned Monday.

“A low pressure system will spin up over Vancouver Island producing periods of light snow and a risk of freezing drizzle beginning early Tuesday morning,” reads the statement.

Four centimetres of snowfall is forecast to accumulate in Metro Vancouver and the western part of the Fraser Valley. The light snow is forecast to turn into light rain as temperatures rise Tuesday afternoon.

Further east in the Fraser Valley, up to 10 centimetres of snow is expected to accumulate.

Conditions are more extreme inland from the north coast, where a risk of frostbite and hypothermia is in effect for places like Kitimat and Terrace due to wind chill values near -20 C.

Environment Canada says the next Pacific system will move in Wednesday night, meaning rain will replace snow in lower elevations on the south coast.

Tuesday’s snowfall will mark one week since southern B.C.’s first major snowfall of the season, which had some commuters trapped in cars and buses for upwards of eight hours.

With temperatures hovering around zero, the city of Vancouver says 11 additional shelters and warming centres that were set to close Monday will remain open an extra night.

A former London police officer was sentenced Tuesday to life in prison with a minimum term of 30 years for raping and sexually assaulting a dozen women over a 17-year period.

Exoplanet 31 light years away could be habitable: astronomers

Astronomers have discovered a rocky exoplanet about a few dozen light years away from Earth with conditions that could make it habitable.