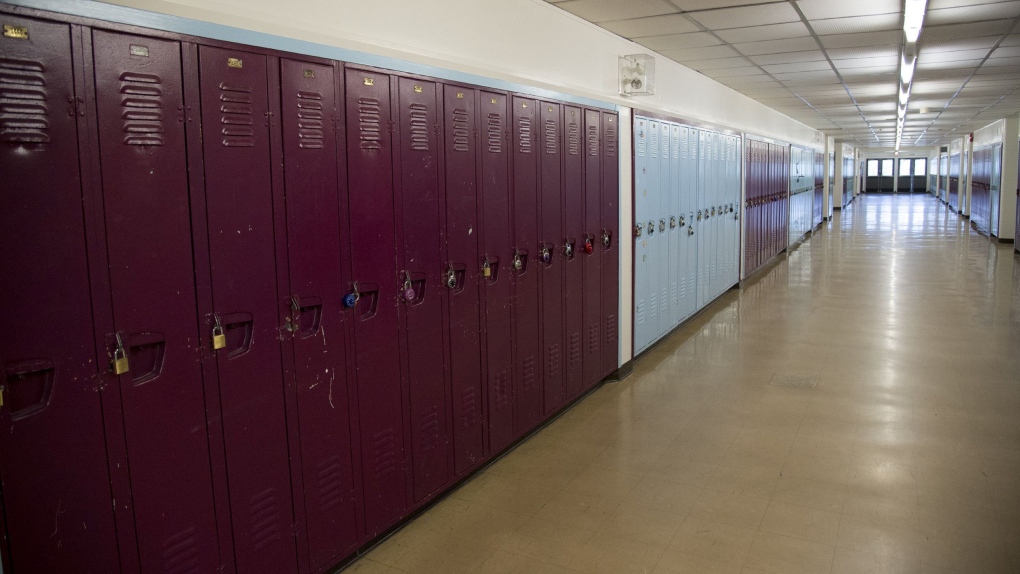 A empty hallway is pictured at Eric Hamber Secondary school in Vancouver, B.C. Monday, March 23, 2020. Bored and isolated students are spending too many hours online and some have started using more substances, but all students will need extra emotional support when classes resume, says a psychiatrist who specializes in youth mental health. THE CANADIAN PRESS/Jonathan Hayward

VANCOUVER -- Bored and isolated students are spending too many hours online and some have started using more substances, but all students will need extra emotional support when classes resume, says a psychiatrist who specializes in youth mental health.

Dr. Shimi Kang said that while teens typically question authority and act impulsively some are now self-medicating with substances or ignoring physical distancing measures as a way to deal with anxiety resulting from the pandemic.

“I would encourage schools to start with social emotional programming and talk about things like coping skills right in that first week going back, talk about what coping skills people used at home, what they can do now as they're reintegrating,” said Kang, a clinical assistant professor at the University of British Columbia's department of psychiatry.

She said academics will have to take a back seat to allowing students to express their thoughts and emotions as part of so-called social emotional learning that is already part of many curriculums across the country as a way to teach students to manage their emotions, learn empathy and compassion and to build resilience as part of a life-long practice.

That type of learning, which is separate from providing mental health supports, may involve students' response to what's happening in their community or around the world and being aware of how they would cope with certain situations, Kang said.

“If there's anything that this pandemic has shown, it is that life skills get us through. It is the adaptability, the resiliency, the communication skills, the emotional regulation skills, the ability to problem solve and have optimism in the face of difficulty. That's where we need to put our focus.”

It's no longer good enough for schools to jam in a lesson on social emotional learning to meet the criteria, she said, advising that it should be incorporated into the overall kindergarten-to-Grade 12 curriculum.

Chris Markham, executive director of the non-profit Ontario Physical and Health Education Association, said part of the response to COVID-19 should involve a plan for all provinces to strengthen the social emotional learning components of their curriculums.

“The broader conversation pre-COVID was still on strengthening this curriculum - B.C.'s, Alberta's, Ontario's, they've all got it somewhere,” he said of most jurisdictions across the country.

“At this point in time maybe the shiny coin in all of this is how important all those skills are to enabling kids to be resilient and for them to thrive, sometimes in situations that are completely out of their control. This should be a wake-up call to us,” Markham said.

“Right now, we're trying to facilitate a conversation with the province about doing that,” Markham said of Ontario, adding he recently discussed the importance of students' well-being with Education Minister Stephen Lecce.

Lecce said in a tweet on April 30 that he'd spoken with Markham about “our strong commitment to supporting the health and well-being of every Ontario student through COVID-19.”

Ontario's Ministry of Education said in an email it has heard from parents and various groups “who have told us to prioritize well-being and mental health of our students. In collaboration with our education sector partners, we will continue to prioritize well-being and mental health when discussing the transition back to school.”

Shelley Morse, president of the Canadian Teachers' Federation, said teachers should be prepared to provide “trauma-informed practices” in response to students' needs, especially those who may be living in fear from having witnessed domestic violence or experienced food shortages during the pandemic.

“We have to make sure that when they come back, we're ready to debrief and deal with those situations and worry about the content at a later time,” she said. “We know we're going to have students with trauma, even trauma from going back into the classroom with all the unknowns.”

So far, only Quebec has announced plans to reopen schools in mid-May for primary students.

Morse said it's hard to know how younger children will react to seeing teachers in personal protective equipment, if they choose to wear it, as well as not being permitted to get close to the classmates they haven't seen in two months.

“I'm a little concerned about Quebec,” she said. “I'm not sure that they've had proper time for that return to school.”

The Ministry of Education in Quebec said in a statement that teachers would be vigilant in providing support to students who need it.

“This increased vigilance will also help detect students who have experienced trauma and those who will develop symptoms after returning to class,” it said.

British Columbia's ministry said in an email that its social emotional learning program, called Core Competencies, is a central foundation of the curriculum.

This report by The Canadian Press was first published May 4, 2020.