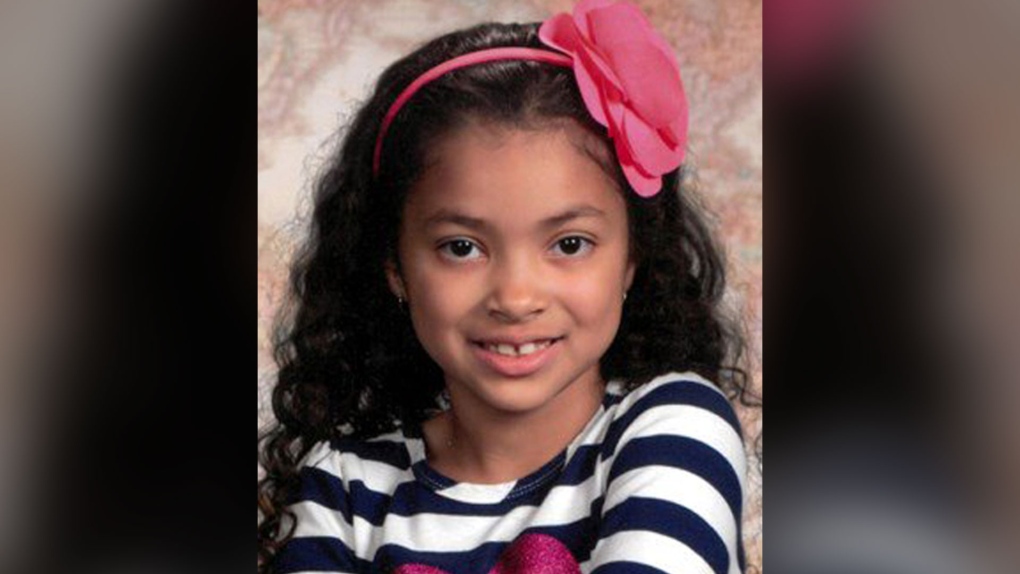 Aaliyah Rosa is shown in this undated image. She died at the age of seven on July 22, 2018.

NEW WESTMINSTER, B.C. -- The first-degree murder trial of a Langley woman accused of killing her daughter has heard the little girl’s father testify about the last time he saw her alive.

Stephen Rosa told the court he and his seven-year-old daughter, Aaliyah, made breakfast together on the morning of July 22, 2018, before heading over to the Langley Events Centre where her mother, Kerry Ann Lewis would be waiting to pick her up for a scheduled Sunday visit.

Rosa told the court the little girl was healthy and happy. He testified he tried to communicate with Lewis at the drop-off, but got no response.

“I remember...Aaliyah gave me this little, a different look than she usually did,” Rosa told the court. “She always used to have a big smile and wave. This time it was just different.”

At the beginning of the trial, prosecutor Kristen LeNoble said Lewis went to a drugstore after picking up her daughter that morning and purchased sleeping pills and an emergency refill of Ativan, as well as other items, and also bought a bottle of vodka. LeNoble said they intend to prove Lewis sedated her daughter, and then drowned her in a bathtub.

The defence has not yet presented its case.

The court has heard testimony about how the little girl’s body was found on the evening of July 22, 2018, in the ensuite bathroom of a Langley apartment where her mother was living at the time.

Rosa told the court he had custody of Aaliyah since he and Lewis separated in 2016, and after the child was not returned to him on time, he called police and reported he was concerned for his daughter’s safety.

“In the past, she (Lewis) had stated that she was would basically take Aaliyah’s life and her life,” Rosa testified. “She would never ever say it directly like that, it was always indirectly, I guess.”

On Tuesday, Rosa testified Lewis was hospitalized multiple times during their relationship due to overdosing on medication. He also told the court she had once tried to burn their house down, and added that incident led to him obtaining a restraining order against her for a period of time.

At one point, prosecutor Chris McPherson asked Rosa to describe his breakup and subsequent communications and interactions with Lewis.

“It was a nightmare,” Rosa replied.

"In what way?" MacPherson asked.

"Pretty much every way," Rosa replied. "Communication was very hard."

“It was very difficult to get Aaliyah to come to me,” he told the court on Tuesday. “There was lots of threats of her (Lewis) telling me to stay away from her...it was very trying.”

The court viewed a number of videos of pickups and drop offs recorded by Lewis in the weeks leading up to Aaliyah’s death.

In one, Lewis accused Rosa of physical abuse and racism as she dropped off her daughter. Rosa testified the allegations were not true, and is heard in the video telling Lewis she should not be saying this in front of Aaliyah.

At one point in the courtroom when Rosa was testifying about the accusations, Lewis could be seen frowning and shaking her head.

There were also videos where Aaliyah was crying when Lewis was dropping her off. Lewis could also be heard at times telling Rosa to keep his distance, and in one video, told Aaliyah she wouldn’t get out of the car because she didn’t feel safe. In that same video, Aaliyah is later heard crying and asking her mother to come out with her.

“This is as far as I’ll go...I’m sorry, honey. This is safe for mommy. Mommy feels safe right here. So you need to go to your dad’s,” Lewis is heard saying.

In videos where Lewis was picking Aaliyah up from her father, she could be heard telling her to “hurry” to get into the car.

Rosa has testified Lewis initially had two supervised visits with her daughter each week, but those visits changed to unsupervised in April 2018.

In the crown’s opening statement, LeNoble told the court Lewis was frustrated about her access to Aaliyah.

Rosa’s testimony is scheduled to continue on Monday.