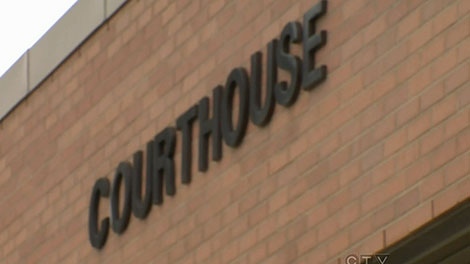 An analysis of three years of Canadian sexual assault cases shows that the vast majority of cases where the victim was a teenage girl involved abuse by a much older man who was often a family member or held another position of trust.

VANCOUVER -- An analysis of three years of Canadian sexual assault cases shows that the vast majority of cases where the victim was a teenage girl involved abuse by a much older man who was often a family member or held another position of trust.

Researchers at the University of British Columbia believe their findings undermine what they call “the statutory rape myth:” that is, that age of consent laws could lead to prosecution of young men who are in a consensual relationship with teenaged girls.

"These are not cases where 14- and 15-year-old girls have agreed to engage in sexual activity with someone who’s 22. They are cases where she did not agree, or was coerced, and he’s 40. That’s a much more typical scenario," said Janine Benedet, a professor at the Peter A. Allard School of Law at UBC, in a statement Thursday.

Benedet and her co-author, Isabel Grant, analyzed 680 court decisions from the past three years where the complainant was between 12 and 17 years of age. They only looked at cases that made it to prosecution, and they looked at cases from every province and territory across Canada.

They found that 99 per cent of the 518 people accused in the cases were men, and 46 per cent of complainants reported sexual assault by a male family member. When family members were taken out of the age calculation, the accused men were still on average 16 years older than the complainants.

Just five per cent of complainants described abuse by a boyfriend, and four per cent involved assault by a male stranger.

The law professors also found that conviction rates and sentences were, on average, higher for strangers than for male family members. That’s despite the fact that abuse by a family member was much more likely to have occurred for months or even years. 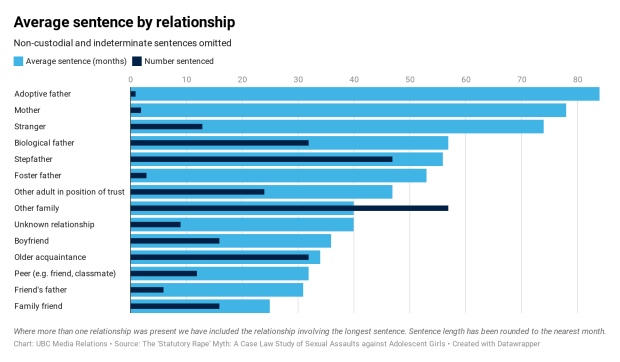 In the era of #MeToo, which has raised public awareness of sexual assault and sexual harassment, Benedet and Grant believe their research shows there needs to be more focus on sexual abuse that happens within the family.

"The family is an institution of enormous power, and the opportunity for abuse of that power—for enforcing secrecy—is really stark. The barriers to coming forward in the family context are very high," Benedet said. 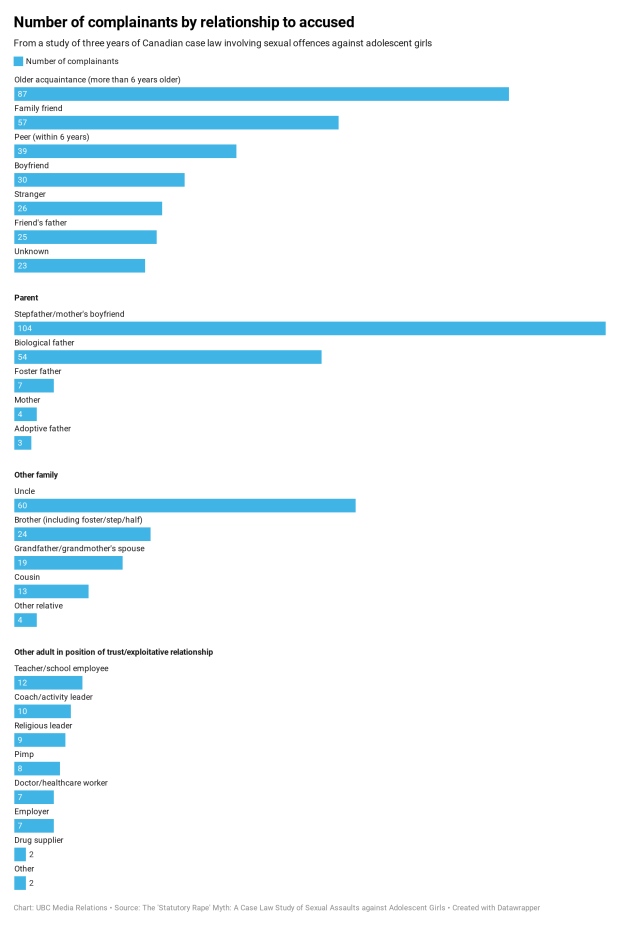