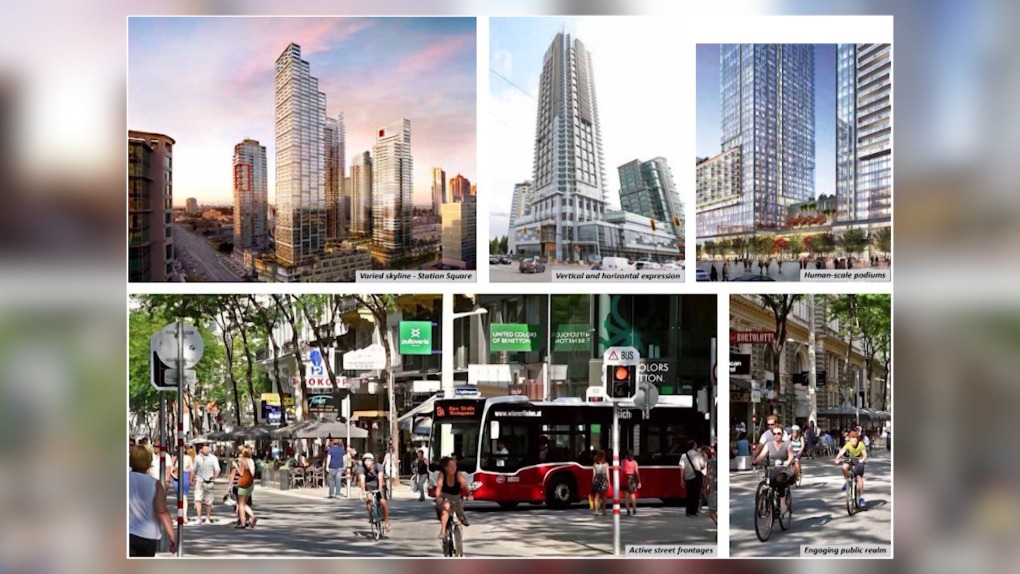 The transformation of the area around Metropolis at Metrotown in Burnaby has been described as one of the largest redevelopments in Metro Vancouver. (Ivanhoe Cambridge)

VANCOUVER -- VANCOUVER – A master plan that would redevelop the heart of downtown Burnaby was unveiled on Monday night, and it could see a massive performance venue built in the city.

The first of two public information sessions was held by staff from the City of Burnaby, as well as real estate company Ivanhoe Cambridge, the owner of Metropolis at Metrotown.

The transformation of the area has been described as one of the largest redevelopments in Metro Vancouver. It would see nearly three million square feet of retail and office space that could be rezoned and redeveloped, including a proposed 250,000 square foot site for performances and live events. The redevelopment also includes plans for a new public square for major civic events and celebrations, more green spaces

"We're showing the public essentially the big picture principles, the concepts, the vision and the goals of what we've come up with in terms of the master plan that responds to the city's downtown plan," said Graeme Silvera, vice-president of retail and development at Ivanhoe Cambridge.

Silvera compared the scale of this project to developments at Lougheed or Brentwood town centres but said the major difference is that the area around Metrotown is designated the city's official downtown.

"So we are different. We are special. And we've essentially taken that to heart in trying to create something that truly does become the heart of the city's downtown," he said.

The area for the master plan covers 17.7 hectares and includes Metrotown mall, three office towers, and a retail space at 4750 Kingsway.

"From the start of the first phase, you're going to see the externalization of the mall. You're going to see retail which right now is 100 per cent focused on enclosed indoor retail be transformed into a mix of indoor-outdoor retail," said Silvera. He said there will be shops on the street, additional residential towers, and office space.

The long-term plan will take several decades to fully implement, with the ultimate goal of transforming the area to a "mixed-use community" as opposed to the "single-purpose mall" that it is now. The city has released artist renderings which show a large downtown community with entertainment and garden spaces on a central boulevard.

"This is an exciting opportunity to deliver on the vision residents helped develop in the 2017 Metrotown Downtown Plan," said Burnaby Mayor Mike Hurley in a statement last month. "That plan outlines a vision of Metrotown as a real destination that attracts people for many reasons – not only to shop, but also to work, play, and spend a night on the town."