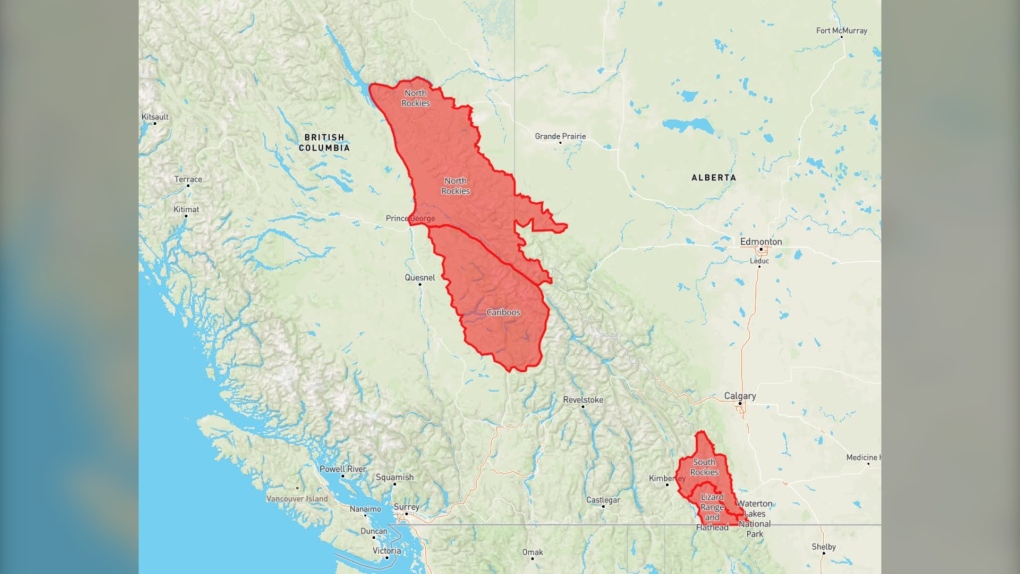 VANCOUVER -- A special avalanche warning for several areas in B.C. has been issued by Avalanche Canada after two people died in the North Rockies.

On Thursday, the organization released a warning for recreational backcountry users in the North Rockies, the Cariboos, South Rockies, Lizard and Flathead, and Waterton Lakes National Park.

“A persistent weak layer (of snow) in the North Rockies has resulted in two recent fatalities,” reads the warning.

“This layer is also the suspected cause of a near-miss incident in the South Rockies, which resulted in very serious injuries,” it continues.

The weak layer of snow, which, if triggered, can cause an avalanche, is widespread throughout B.C., but the agency says it is most susceptible to human triggering in the regions listed.

The warning, which took effect on Feb. 25, will continue through to the end of Feb. 28, after which it will be reassessed.

“The next wave of storms is going to make for great riding but will also increase the load on these persistent weak layers, making avalanches even easier to trigger,” he said.

“This string of fatal and serious incidents should be a wake-up call for all backcountry users. This layer is deep enough that it’s not easily seen, but large and destructive human triggered avalanches are expected.”

Throughout the winter, officials have warned about extremely high avalanche risks in various parts of the province, including on the North Shore mountains of Metro Vancouver and at Whistler.

Avalanche Canada lists regional avalanche forecasts online, and advises that every person heading into the backcountry have avalanche safety training and essential rescue gear such as a transceiver, a probe and a shovel.