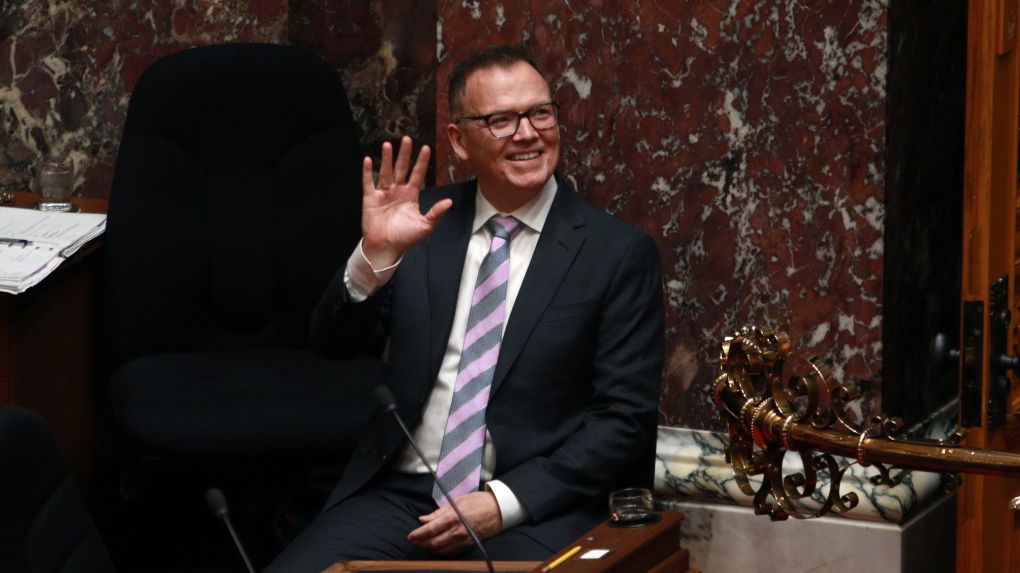 Opposition B.C. Liberal Party Leader Kevin Falcon waves to the gallery before his introduction to the house in the legislative assembly at legislature in Victoria, Monday, May 16, 2022. THE CANADIAN PRESS/Chad Hipolito
VICTORIA -

British Columbia Liberal Leader Kevin Falcon said that if elected premier he would halt plans to build a new Royal B.C. Museum, calling it a “billion-dollar vanity project” after he took his seat in the legislature.

The Opposition leader also attacked the New Democrat government's record on affordability after he was officially sworn in Monday, having won a byelection in Vancouver-Quilchena last month.

The former Liberal cabinet minister used question period to criticize the timing of Premier John Horgan's announcement that a new museum in Victoria would be built at a cost of about $800 million.

A satellite facility for research and storage in the neighbouring community of Colwood, announced two years ago, has been budgeted at $224 million.

“Sadly, six people are dying every day from an overdose under this government's watch,” Falcon said. “The worst in history. One in five British Columbians don't have a family doctor and when they try to go to a walk-in clinic, they face the longest wait times in Canada.”

Outside the legislature, Falcon said he was “massively disappointed” at the timing of the museum project, “when British Columbians are struggling with the highest housing and the highest fuel prices in North America at $2.34 per litre.”

“I also want to be clear about this: should I become the next premier of the province, we are cancelling that billion-dollar vanity project,” he said.

Falcon called on the NDP to use the money from the project to help people pay their bills instead.

Horgan said on Friday that the museum, next door to the legislature, needs to be brought into the 21st century, making it seismically safer, inclusive, accessible and modern.

He said the project would protect B.C.'s collective history and he urged Falcon and the Liberals on Monday to support the project.

In November, the museum announced some sections were closing while work was done to decolonize Indigenous exhibits. The move came in response to calls from Indigenous leaders after reports alleged there were racist and toxic working conditions at the institution.

Falcon, 59, was sworn in during a brief ceremony in which he signed the oath of office and entered the chamber as its newest MLA.

He won the BC Liberal leadership last February, replacing former leader Andrew Wilkinson, who resigned the Vancouver-Quilchena riding earlier this year, his party having lost the October 2020 election to the New Democrats.

Falcon's return to the legislature comes after about a decade away from politics to help raise his young family and work in the private sector with a Vancouver property investment company.

He had held portfolios of finance, health, transportation, and the deputy premiership in former B.C. Liberal governments, before he finished second to former premier Christy Clark in the party's 2011 leadership race.

At the signing ceremony, attended by his wife, Jessica, and daughters Josephine and Rose, Falcon said he would lead an Opposition that kept the government under pressure.

“In the coming weeks, months and years, you will see that we will be holding government to account for results or lack of results,” said Falcon at the ceremony. “I truly believe at the end of the day, we should always be judged not by what we say but by what we do.”

This report by The Canadian Press was first published May 16, 2022.