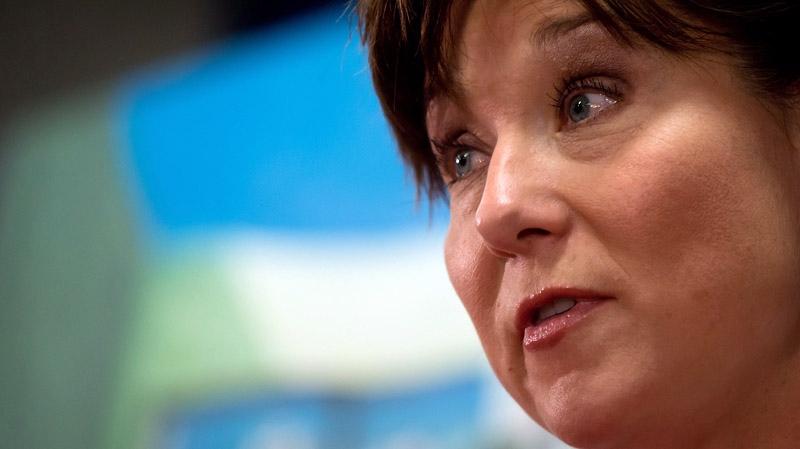 British Columbia Premier Christy Clark responds to questions about the teachers' dispute and strike on Tuesday May 27, 2014. THE CANADIAN PRESS/Darryl Dyck

For the first time since Christy Clark’s surprise election victory last year, a majority of British Columbians disapprove of her job performance, according to a new poll.

Just one-third of respondents in Insights West’s “B.C. Government Report Card” said they like the way Premier Clark is handling her duties, compared to 54 per cent who don’t.

On top of that, the poll found public confidence in the governing BC Liberals eroding on a slew of issues, including public safety, finances, and education.

“The biggest drops observed for the provincial government this semester are on the environment, energy and accountability,” pollster Mario Canseco said in a release.

“Still, there is also a higher level of dissatisfaction on issues that used to see better ratings, such as safety and jobs.”

Support for B.C.’s handling of crime dropped five per cent since May, down to 36, while housing and homeless stooped to 17 per cent.

The government’s much-touted push for liquefied natural gas wasn’t safe either, with only 34 per cent saying the province has done well with the burgeoning energy industry.

Support for the opposition New Democratic Party increased one per cent since April, up to 40, while support for the BC Liberals dropped two per cent down to 36.

NDP Leader John Horgan didn’t fare much better than Clark, with one-third approving of his performance and about 30 per cent disapproving.

The online poll surveyed 805 B.C. adults who are Your Insights panel members. It has a margin of error of plus or minus 3.5 percentage points, 19 times out of 20.