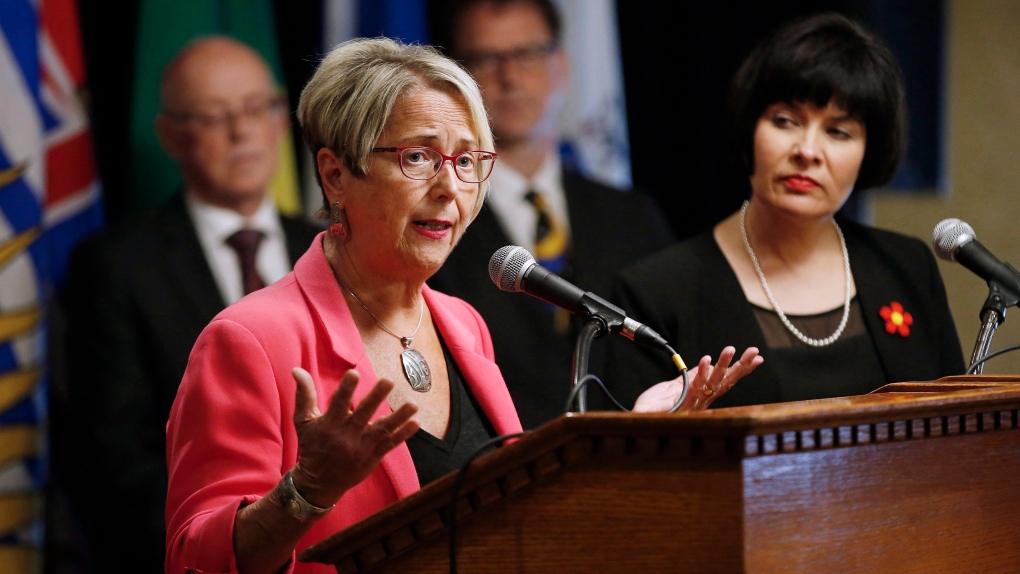 Judy Darcy, British Columbia Minister of Mental Health and Addictions responds to a reporter's question at a press conference during the Conference of Provincial-Territorial Ministers of Health in Winnipeg, Friday, June 29, 2018. THE CANADIAN PRESS/John Woods

VANCOUVER -- B.C.'s minister of mental health and addictions has announced she won't seek re-election, while a former MP has announced his intention to seek the NDP nomination for a provincial riding.

The announcements from current minister Judy Darcy and former MP Nathan Cullen follow a string of similar announcements from NDP politicians in recent weeks, amid growing speculation that B.C. Premier John Horgan plans to call a snap election this fall, in the middle of the COVID-19 pandemic.

Five cabinet ministers have now announced they won't run again since the beginning of the month.

"I will always feel a restless sense that there is still so much more to do," Darcy said in a statement.

“But I am looking forward to spending more time with my husband Gary, the love of my life who has stood with me and supported me for 44 years, and my six-year-old grandson who fills my heart with joy."

"It was an incredible honour to serve as MP for Skeena from 2004 to 2019," Cullen said on Twitter. "We are now living in unprecedented and challenging times. I want to offer my energy and experience to help."

Cullen is seeking the nomination in the northern B.C. riding of Stikine, a seat currently occupied by provincial Minister of Forests, Lands, Natural Resource Operations and Rural Development Doug Donaldson.

Like Darcy, Donaldson says he will not seek re-election whenever British Columbians next head to the polls.

Darcy was appointed to her role – the first of its kind in B.C. and in Canada – as part of Horgan's original cabinet when the NDP was elected in 2017.

She has overseen the province's response to the ongoing overdose crisis, which has tragically worsened during the pandemic. Part of the government's response has included adding more supervised consumption sites and expanding access to naloxone.

In her statement, Darcy acknowledged the difficulties B.C. has faced battling two public health emergencies at once, but said she's proud of the steps the province has taken.

"We are the only government in Canada to take action on all fronts at once – including doubling the number of youth treatment and recovery beds and providing access to safer prescription alternatives to the poisoned drug supply," she said.

The other ministers who have recently announced they won't seek re-election are Michelle Mungall, minister of jobs, economic development and competitiveness; Shane Simpson, minister of social development and poverty reduction; Scott Fraser, Indigenous relations and reconciliation minister; and Donaldson.

Back in the spring, Finance Minister Carole James also revealed she would not be running again after she was diagnosed with Parkinson's disease.

Cullen is the third former NDP MP to announce plans to make the jump to provincial politics in the next B.C. election. Former MPs Murray Rankin and Fin Donnelly have also announced plans to run for the BC NDP.

The possibility of a snap election has been criticized by the BC Liberals and Greens as wholly unnecessary, given the level of co-operation between parties and the fact that the province is still fighting the spread of COVID-19.

For an election to proceed, Horgan would have to ask B.C. Lieutenant Governor Janet Austin to dissolve the legislature. This week, former constitutional advisor Norman Spector penned an open letter urging Austin to "send him away for a day" to consider whether he really wants to send voters back to the polls.

Spector said doing so would break B.C.'s commitment to fixed date elections, and violate the confidence and supply agreement the NDP made with the Greens that allowed them to take power in the first place.