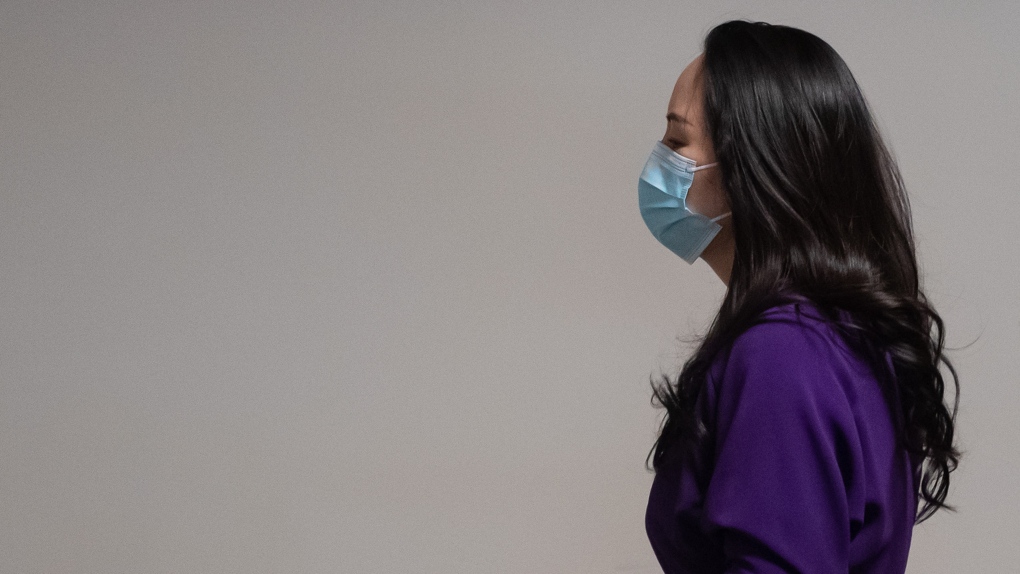 Meng Wanzhou, chief financial officer of Huawei, wears a face mask to curb the spread of COVID-19 as she arrives at B.C. Supreme Court to attend a hearing in Vancouver, on Tuesday, Sept. 29, 2020. (Darryl Dyck / THE CANADIAN PRESS)

VANCOUVER -- A B.C. Supreme Court judge is considering whether an argument that the United States misled Canadian officials about its case against Huawei executive Meng Wanzhou holds enough water to advance to another hearing in her extradition case.

Meng's defence lawyers tried to convince Associate Chief Justice Heather Holmes during a hearing this week that there's "an air of reality" to that argument and it should be heard in full next year, while lawyers for Canada's attorney general accused them of trying to turn an extradition hearing into a lengthy trial.

Holmes reserved her decision on the argument, as well as whether to admit additional evidence that would support that claim, on Wednesday.

Meng is wanted in the United States on fraud and conspiracy to commit fraud charges that both she and Huawei deny.

She is accused of misrepresenting Huawei's relationship with Skycom in a PowerPoint presentation to HSBC, putting the bank at risk of violating U.S. sanctions against Iran.

Defence lawyer Frank Addario told Holmes Wednesday that Meng's case should not be measured against a list of cases where similar applications were dismissed.

"You were told there was a long, eye-watering string of cases that dismiss these kinds of motions," Addario said in reference to the Crown's arguments this week.

"This is not a normal garden-variety extradition case, our record is different."

Addario argued that the case stands apart because of alleged political interference by U.S. President Donald Trump, and because the U.S. left out key details from the PowerPoint presentation in describing its case against Meng to Canada.

Meng told HSBC that Huawei and Skycom worked together in Iran, which was enough information for HSBC to navigate U.S. trade laws, he said.

Lawyers for Canada's attorney general accused the defence of wasting the court's time by pursuing a line of argument and evidence better suited for a U.S. fraud trial.

Crown prosecutor Robert Frater urged Holmes on Tuesday to "cut off at the knees" the defence team's arguments because they have no chance of success.

An extradition judge has a duty to ensure proceedings are swift. Allowing the argument to proceed would mean each side must collect testimonies on what is fundamentally a question of U.S. law - a topic that is outside the realm and responsibility of a Canadian extradition hearing.

"An extradition hearing is not a trial," Frater said.

Addario countered that the alleged omission of details in the record of case against Meng constituted a deliberate attempt to deceive a Canadian court.

"The privilege of being a treaty partner whose version of events is presumed to be reliable doesn't include the privilege of writing a certified record of case knowing it's going to the court in a way that's designed to trick the judge into thinking a sanctions violation was inevitable."

Meng, who is Huawei's chief financial officer, was arrested at Vancouver's airport in 2018 at the behest of the United States.

She returns to court Oct. 26 for five days of evidentiary hearings on whether her arrest and detention was conducted lawfully.