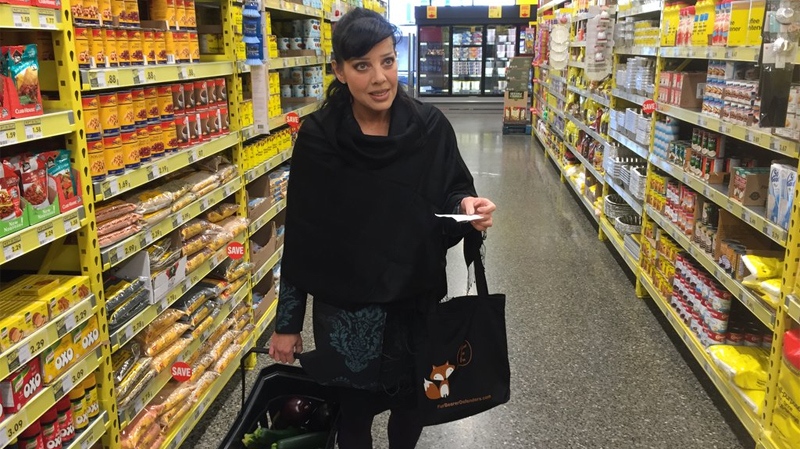 Canadian singer Bif Naked stocks up on groceries ahead of the welfare challenge. Nov. 3, 2015. (Jim Fong)

They may come from very different worlds, but for the next seven days NDP MP Jenny Kwan and singer Bif Naked will share a joint mission: surviving on a meagre $3 a day.

On Tuesday, the Canadian music icon and federal politician embarked on the fourth-annual Welfare Food Challenge, where participants are allowed to spend just $21 on food over seven days.

That’s the amount B.C. welfare recipients have left each week for groceries after paying for rent, a bus pass and phone, according to Raise the Rates, the group behind the awareness-raising event. The standard monthly rate in British Columbia is $610, which critics say is not enough to make ends meet.

Bif Naked agrees. She took part in the 2014 event and signed up again this year because she feels nothing has changed.

“There are kids that don’t get enough to eat. This is about nutrition. It’s just not adequate funds.”

In her shopping trip at discount grocery store No Frills, the entertainer bought chickpeas for protein, seven bananas, two eggplants, spinach, three zucchinis and a clamshell package of spinach.

She went heavy on produce because of her vegan diet, but admitted she has known many people on assistance who can't afford healthy, natural foods -- and will opt for instant noodles and pasta because they are more filling.

Thanks Darcy! THIS time I omitted rice and iceberg lettuces, and added aubergines/eggplant. *tummygrowls* https://t.co/AS4WaksPwT

Kwan, who is traveling to Ottawa for part of the week for work in the Canadian parliament, bought No Name peanut butter, a loaf of bread, apples, a package of No Name saltine crackers, and a carton of eggs, which she will boil and ration.

The politician said dairy, like cheese and yogurt, was too expensive and meat was absolutely out of the question, as were most fresh fruits.

“I am worried about the balanced diet question,” she told reporters. “I know that I will be hungry.”

Kwan says she joined the challenge to highlight the daily struggles British Columbians on disability face.

“We’re not just talking about adults. We’re talking about children and seniors, people with disabilities as well, who are facing these challenges in their everyday experience,” she said.

She also challenged B.C. Premier Christy Clark to experience living on the mediocre budget, to see if she could do it.

Welfare rates in B.C. have not gone up since 2007, and the province has the highest poverty rate in the country, according to Raise the Rates.

TODAY! WE BEGIN @Raisetherates #WelfareFoodChallenge Eating on $21.00 for one week. Could you? Sign up: https://t.co/KJVRUIldEH Pls RT