'It's an extremely sad ending': Baby deer euthanized despite efforts to save it 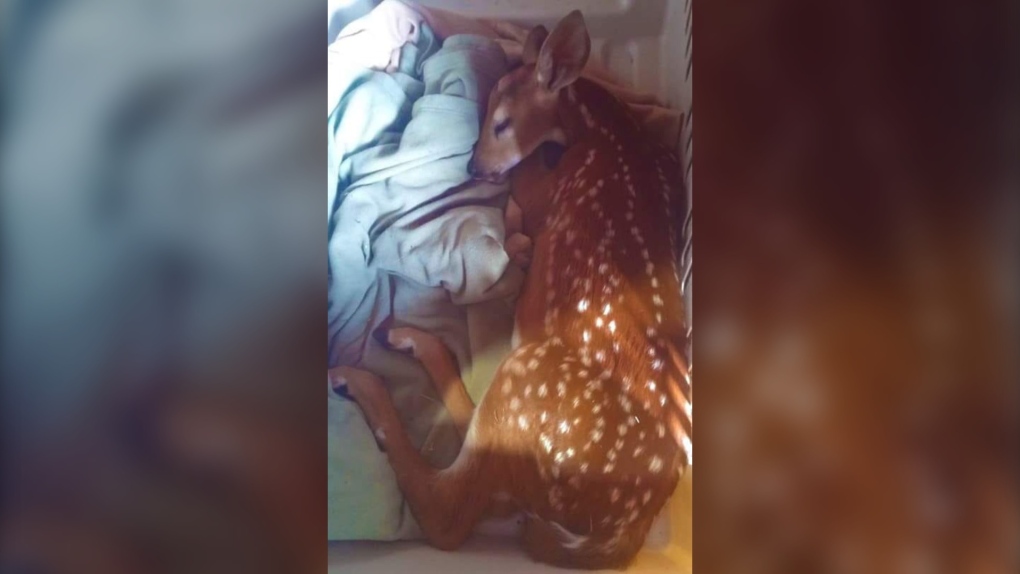 Gilbert the fawn prompted an outpouring of support on social media, but in the end the province and the vet who found him agreed he should be put down. (Warren Peace Bunny Sanctuary/Facebook)

After three days of frantic phone calls, animal advocates across the province have come up short in their efforts to save a baby deer with an injured leg.

Dr. Moshe Oz and the staff at Rose Valley Veterinary Hospital have been caring for the fawn, which Oz's son named Gilbert, since Tuesday. On Friday, after speaking with the B.C. Ministry of Forests, Lands, Natural Resource Operations and Rural Development, Oz agreed to euthanize the young animal.

Oz and his allies had spent the last three days calling provincial officials and wildlife rehabilitation facilities, looking for a way to keep the deer alive and in a permanent home.

Gilbert's problem was a leg fracture that had become infected and needed amputation. Oz said he was willing to do the surgery, and advocates had found another organization that was willing to furnish a prosthetic for the deer.

Unfortunately, there was no facility with the proper permits that Gilbert could live in within a 200-kilometre radius of where he was found. Getting a special permit for a facility within the radius would have taken up to 30 days, and moving him farther than 200 kilometres away from where he was found is against provincial law.

Oz said he was hoping to find a way to "bend the rules," but ultimately couldn't do so.

"It's hard to do in a short time," he said. "Unfortunately, the baby is not enjoying his time, right? He has an open fracture ... It's not in his best interest to stay in the hospital for 30 days, heavily medicated. So we all did agree that it's the right thing for him."

At the same time, Oz said he hopes that Gilbert's story will result in changes, including potentially a new process that would allow some flexibility to the 200-kilometre rule.

"The idea about this rule is to prevent diseases from area to area," Oz said. "I do agree, completely, and it's very, very important."

But if an animal is not diseased and not a risk to transmit disease in its new habitat, it should be allowed to be moved, he said.

Gilbert' story prompted an outpouring of support on social media.

Antoinette Monod, who runs Warren Peace Bunny Sanctuary in Lake Country, was among those who spent their days making phone calls and sharing Gilbert's story with media outlets.

Monod told CTV News Gilbert was a victim of a lack of creative thinking on the part of officials.

"At the end of the day, it's conservation's call, unfortunately," Monod said. "They're not looking at him as a specific case … It would be a shame to put him to sleep because he's bright and alert and he wants to live. He's been fighting."

One of the phone calls Monod made on Gilbert's behalf was to Ellen Campbell, a law student at the University of Victoria and a former volunteer at Warren Peace.

Campbell, who said she has a specific interest in animal law, told CTV News it's possible Gilbert could have been saved under existing laws, though it would have required Conservation Officers to make a judgement call.

"The interesting part about this case is that it's also a sort of policy and discretionary decision as well," Campbell said.

Conservation Officers have the authority to keep wildlife in their possession without a permit, she said, and a provision of the Criminal Code allows peace officers -- including conservation officers -- to solicit the assistance of members of the public in completing their duties. By extension, this would mean the Conservation Officer Service could have given Oz the authority to possess Gilbert indefinitely, on behalf of an officer, Campbell said.

During that time, a wildlife rehabilitation centre could have applied for a permit to keep Gilbert, a process that takes up to 30 days for approval, she said.

Ultimately, the province decided not to pursue this arrangement. In a statement, the ministry called the fawn's situation "unfortunate," adding that Gilbert's injuries would have hindered his quality of life and created "significant health issues in the long term."

"Both the ministry and the vet looked for long-term care facilities for the deer, however no facilities were found that are equipped to deal with this type of injury in a wild animal and the significant ongoing care required," the ministry said.

"The Conservation Officer Service (COS) with the Ministry of Environment became involved because anyone who possesses wildlife must require a permit under the Wildlife Act. However, no action was required on the part of COS."

Oz said he hopes that Gilbert's death will not be in vain.

"At least we learned something," he said. "At least we created some kind of a movement, some kind of motion … Three days ago, if I were to call the MLA or anyone and ask him to start to do something like this, for sure somebody would laugh. But he understands, all of a sudden, that, oh wow, there is a need."

Oz said he was impressed by the outpouring of support Gilbert received.

"We all gave everything we have here," he said. "It was three, very, very intense days."