Quebec has become the first province to announce residents will soon need to show proof of vaccination to gain access to some non-essential services like restaurants and gyms.

When asked if B.C. will follow suit, provincial health officer Dr. Bonnie Henry didn’t rule it out, saying Thursday that officials are "looking at all options and continue to look at all options.”

“We are working on it and looking at all these issues,” said Dix. “Quebec made an announcement today, something they have been working on for some time and I believe that they talked about before. And we are working on all those issues as well.”

“My opinion is that B.C. should follow suit. I think it makes sense scientifically, it makes senses epidemiologically,” said McNagny.

With support like that, McNagny says the province shouldn’t shy away from requiring proof of vaccination in busy public indoor spaces.

“I think whatever we can do to prevent people from bringing virus into those situations is a good thing, and people who choose not to get vaccinated should not be in those situations,” he said.

While Quebec has been working on a vaccine passport QR code for months now, British Columbians only have the small, hand-written business card they’re given when they get their shots, and access to a PDF of their vaccination record on the Health Gateway app. The health minister says that will change. 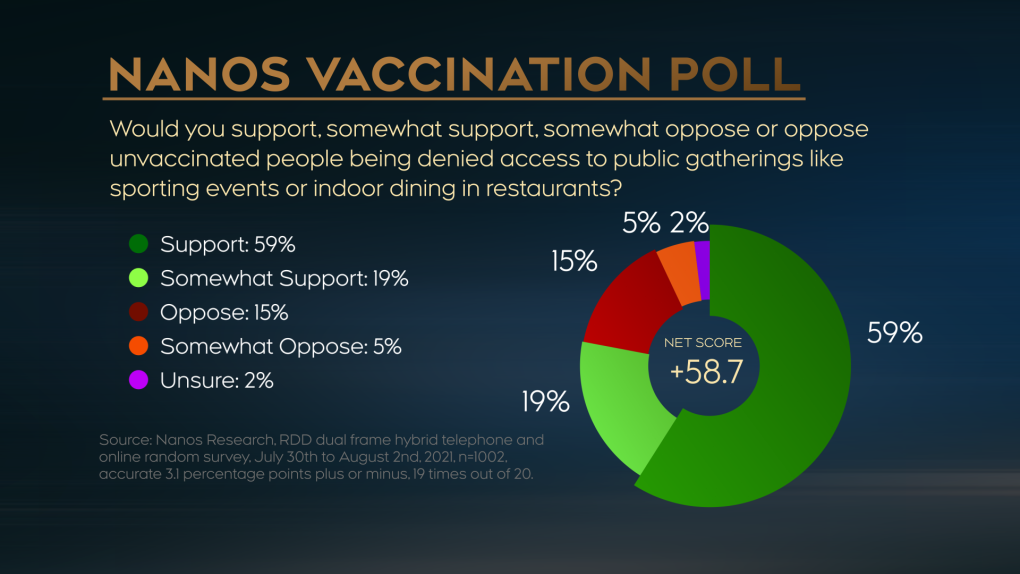 “We are doing the work now for make it easier for everyone to have access to their vaccine record,” said Dix.

While the province won’t commit to following Quebec’s lead on a domestic vaccine passport, Dix did offer some insight on the government’s thinking.

“I would say to everyone that no, you are not obliged to get vaccinated in B.C. or anywhere else in Canada. But there are consequences if you don’t,” said Dix. “I think everyone will have to understand that.”

Ontario Premier Doug Ford is set to make an announcement on Wednesday as the province’s COVID-19 passport system kicks off.

Former U.S. President Donald Trump on Tuesday sued his estranged niece and The New York Times over a 2018 story about his family's wealth and tax practices that was partly based on confidential documents she provided to the newspaper's reporters.

Canada has now fully vaccinated 79.13 per cent of the country's eligible population.