A Facebook post written by a Vancouver mother at a time when she was feeling a bit sorry for herself may have helped save the lives of five strangers.

Erin Barrett had a tough pregnancy, feeling sick the entire time she carried her second child, but her condition worsened so much toward her due date that she had to be admitted to hospital.

She'd assumed the sickness was a surge of hormones, but doctors thought it was something more.

They performed test after test, she told CTV News two years after the fateful hospital stay, but couldn't determine what it was. Finally, an ultrasound technician checked her ovaries, and found a mass on her left side.

"The mass was so big," she recalled Tuesday.

"It was bigger than a volleyball. And it actually turned out size-wise to be bigger than my baby."

The baby went into distress, and Erin was rushed to an operating room for an emergency C-section. Little Edie's umbilical cord was wrapped twice around her neck, but she was delivered unharmed.

After Edie's dramatic entrance into the world, Barrett said learning she had a healthy daughter was a "beautiful moment" for her and her husband.

Then surgeons cut Erin open to remove what they hoped was a cyst. Tucked behind her ribs, it took them a while to find it.

She was awake the entire 2.5 hours she lay on the operating table.

"They had to go looking for it… And when they pulled it out, they realized at that moment that it was most likely something more than a cyst." 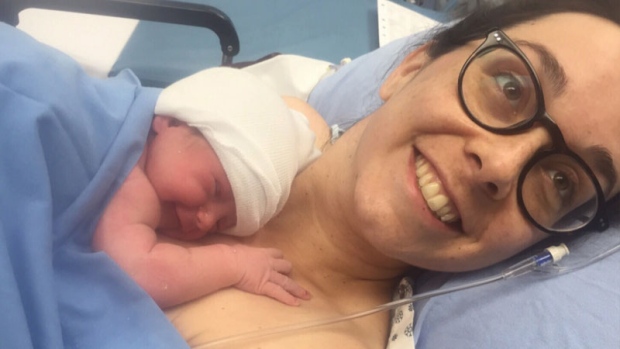 "It's not what you expect to go through when you've got a toddler at home and a newborn daughter," Erin said.

"You're supposed to be at home in that bubble of feeding and naps and just enjoying your family. Instead, we were arranging child care so I could get chemo, and looking after me when I was home, and it wasn't at all what we expected for the first six months of my daughter's life."

Erin went through chemo, then completed 25 radiation sessions. One of the hardest parts for her was the time away from her newborn.

"I just wanted to be with her. That's all I wanted. And little things that feel so important when you're a new mother – I had to stop breastfeeding her because of the chemotherapy – and of course I wasn't going to do anything to hurt her, but it was heartbreaking to me that she and I didn't have that bond anymore that I wanted."

In the middle of treatment, about three months after Edie's birth, Erin decided to go public with her story.

She'd talked her doctor into rearranging her chemo schedule so she wouldn't be getting the treatment during her daughter's first Christmas, but had been instructed to be careful in the days between treatments.

Worried about the germs she might be exposed to at a pub, she skipped plans she made with friends and turned her disappointment into something positive.

Up until that moment on Dec. 22, 2015, she'd been private about her experience. She said it had been really hard on her family, and was a lot to process.

"But I realized in that moment there that there was the potential for my story to help others," Erin said.

So she wrote something quickly, and asked her husband to review it. He told her he supported her sharing it, and that it was important.

Knowing early diagnosis can save lives, her goal was simply to raise awareness of the signs of ovarian cancer, enough to encourage women experiencing symptoms to get tested.

"The symptoms of ovarian cancer are so vague and so subtle and so easy to miss. I had missed them," she said.

"The reason ovarian cancer is so deadly is because most women are diagnosed at Stage 3 and 4."

The most recent statistics from the Canadian Cancer Society estimate that only less than half (44 per cent) of women diagnosed will survive at least five years. Approximately 2,800 Canadian women will be diagnosed this year, and 1,800 will die from the disease.

"Those numbers send chills down your spine," Erin said.

"Progress hasn't been made in this disease in terms of outcomes for over 50 years. I just thought if there's something, anything I could do to make sure that even one other woman was diagnosed early the way I had been, and just opened up a world of possibilities in terms of treatment, life expectancy, quality of life, then I felt an obligation to do it."

So she posted the symptoms and went to bed. 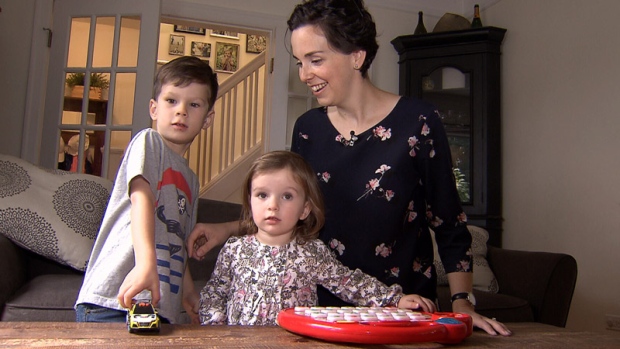 The post she'd hoped would reach even just one person was shared more than 303,000 times.

Erin started getting messages of support and encouragement from women all over the world, many saying they'd been through it and wishing her strength.

"And then there were the people who said, 'I didn't know. I didn't know those were the symptoms. I'm going to my doctor,' which is what I wanted."

In the time that has passed since the post was written, five women reached out to her to say they'd seen it, recognized the symptoms, gone to their doctor and been diagnosed with cancer. Four had ovarian cancer, and one was diagnosed with uterine cancer.

All five were diagnosed early and went through surgery. None needed further treatment.

"It gives me shivers," Erin said.

One of those women, who lives near Toronto, said her uterine tumour was about 13 centimetres and already causing some complications when she saw Erin's post.

Another who spoke to CTV News said she'd seen the post from Yorkshire, England, and felt the symptoms were eerily similar to her own.

"I just feel so, so lucky because had I not seen that post until things had got more severe, I don't know where I could have been by then," Rachel Austin said.

While the women have never met in person, they were connected by Erin's words.

"It's really hard to wrap your head around that an action so small – writing a post at my dining room table one night when I was feeling sorry for myself – could end up impacting five people's lives that way. It's so much more than I ever had hoped for. It's incredible," she said.

Erin doesn't take the credit herself, but sees it as a group effort from thousands who saw her post and took a few seconds to share.

"By doing that, it was this community effort that potentially saved these women's lives."

A year and a half later, Erin had another scare. She opted to undergo a hysterectomy to reduce her chances of the cancer coming back, a decision that was difficult for a mother who always wanted to have three kids.

"We recognized the importance of ensuring that I'm around and well and healthy for the two gorgeous kids I have now," Erin said.

And she called the voluntary surgery one of the best decisions her family has ever made, because the operation uncovered another tumour in her right ovary.

"Who knows if it would have turned into something more or not, but that's a question I never have to worry about because it's gone now, I don't need any further treatment," Erin said.

For more information on ovarian cancer, visit the BC Cancer Agency website.

The BC Cancer Foundation hosts fundraising events for prevention of women's reproductive cancers, including a luncheon being held in Vancouver on Wednesday.