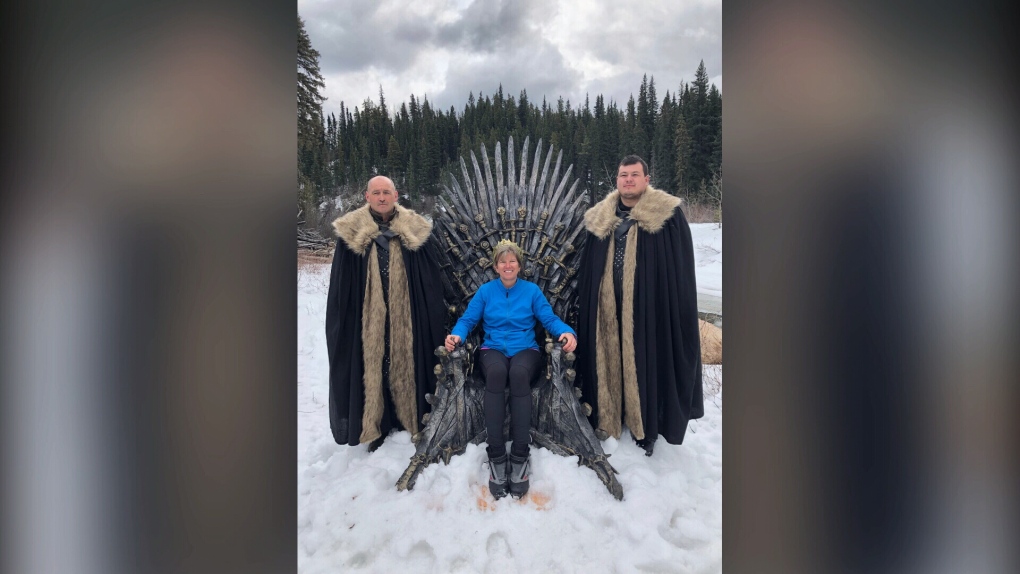 Birgit Sharman sits regally upon her "Throne of Ice", found south of the town of Tumbler Ridge. (Facebook/HBO Canada)

It’s one of six royal seats from HBO’s hit series “Game of Thrones” hidden around the world, and was discovered 14 kilometres south of Tumbler Ridge.

Birgit Sharman and her husband Kevin found the looming look-alike of the show's "Iron Throne" on Tuesday.

HBO hid the thrones in random locations, hinting at their various whereabouts via a series of clues and video clips left online.

The Game of Thrones Twitter account posted a picture of the massive replica, which is modeled after the show’s eponymous throne, legendarily-formed by a dragon’s breath melting hundreds of swords. The TV show was developed from author George R.R. Martin’s  “A Song of Ice and Fire” series of novels.

The picture’s caption reads “We stand on guard for thee. Join the Quest,” and shows frozen waterfalls in the background, a nod to the Canadian national anthem and Canada’s often harsh and  unforgiving winters. The royal seat was originally left on the frozen Babcock Creek, before warm weather forced a move to safer ground, near Highway 52.

Birgit Sharman is the vice-president for the Tumbler Ridge Global Geopark, an area recognized by UNESCO for its “internationally significant geological heritage.” Kevin Sharman is listed as a scientific advisor on the geopark’s website.

Four other thrones were previously discovered in England, Sweden, Spain, and Brazil, while the clue to the final throne will allegedly be revealed later this week.

The throne will be around until Monday, April 1, and the geo park has left a map to the throne for travellers wanting their own chance to sit on the throne.