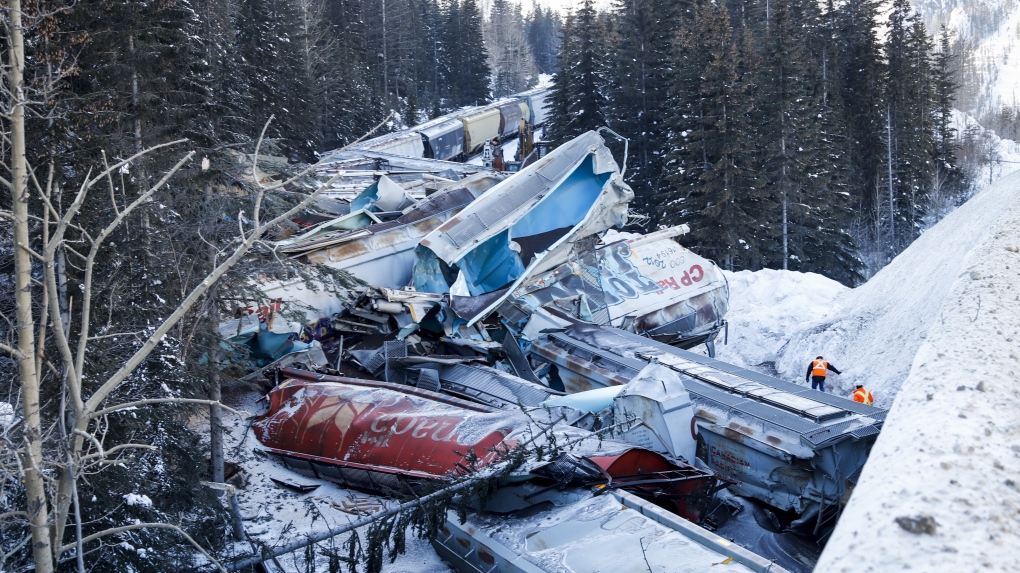 CALGARY, AB -- The Transportation Safety Board says a year after a fatal train derailment near the Alberta-British Columbia boundary, it is ready to compile the information it has gathered into a report.

A Vancouver-bound Canadian Pacific grain train was stopped on a mountain slope in the frigid early-morning hours of Feb. 4, 2019, when it began moving on its own and plummeted from a bridge.

The safety agency says in an update that the train consisting of 112 cars and three locomotives separated into three sections after it sped down a treacherous hill in Yoho National Park.

It says only the 13 grain cars and tail-end locomotive that remained on the track after the crash were recovered for further examination and testing.

The agency says its work so far includes examining all relevant data from the crash site, collecting communications with train crews and conducting interviews.

It says it has also looked at railway management and regulatory oversight, the safety culture at Canadian Pacific, decision-making and crew resource management.

No data could be retrieved from the recorder in the lead locomotive because it was too damaged.

The safety board says its investigation is now moving from examination and analysis to the report phase.

For cases as complex as the Field derailment, the board says it aims to complete investigations within 600 days, though that timeline can vary.

The train was stopped with its airbrakes applied for three hours, but no handbrakes were used to further secure the train.

The safety board said after a job briefing between the previous crew and a supervisor, the conductor applied retainer valves to the high-pressure position on 75 per cent of the cars on the train.

After the crash, Transport Canada ordered that railways immediately use handbrakes on all trains stopped on mountain slopes.

The Transportation Safety Board does not assign fault or determine civil or criminal liability.

Two labour groups have called for an independent investigation. The Alberta Federation of Labour alleges the police service directly employed by the railway conducted a flawed investigation. Teamsters Canada, the union that represents railway employees, said the RCMP must be called in.

The calls followed a CBC “Fifth Estate” investigation featuring an interview with a former CP police officer who alleged the company prevented him from obtaining key witness accounts, withheld evidence and ordered officers to keep the investigation narrowly focused on the crew.

This report by The Canadian Press was first published on Feb. 6, 2020